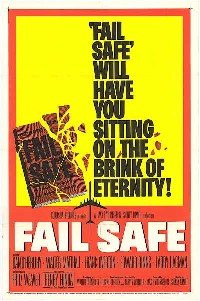 "Fail-Safe" is a 1964 film directed by , based on the 1962 novel of the same name by and . It tells the story of a fictional nuclear crisis, and the US President's attempt to end it.

The film takes place during the , when tensions with the were at their height. The movie starts with a dream sequence of a bull being killed by a . When the dreamer wakes, we learn that he is Air Force General Warren Abraham "Blackie" Black (Dan O'Herlihy), and he believes that the dream is some sort of personal omen. The scene shifts to the headquarters of the (SAC), where a Congressman () is being given a tour of the facility by General Bogan (). During the tour, SAC detects an unknown aircraft approaching North America from Europe. American fighter planes are deployed to meet the potential threat. As a protection, American are dispersed to attack positions outside the borders of the Soviet Union. The bombers have standard orders not to proceed past a certain geographical point, the "fail-safe" point, without receiving a special attack code. The original "threat" is proven to be innocuous, and recall orders are issued to the American bombers. However, due to a technical failure, the attack code of "CAP 811" (rather than the recall order) is transmitted to Group Six, which consists of six Vindicator supersonic bombers. Colonel Jack Grady (), the head of the group, tries to contact mission control in Omaha to verify the fail-safe order (called Positive Check), but due to Soviet radio jamming, Grady cannot hear Omaha. Concluding that the fail-safe order and the jamming could only mean nuclear war, Grady commands the Group Six crew towards , their intended target for the day. At this point, a series of disastrous fail-safe orders come into play: the bomber crews are trained that upon receiving an attack code on the fail-safe box, there is virtually no way to supersede it; they are trained to ignore all communicated orders, on the assumption that once an attack is directed, any attempts to stop it must be Soviet trickery.

At meetings in Omaha, the Pentagon, and in the fallout shelter of the , American politicians and scholars debate the implications of the attack. Professor Groeteschele (played by ), who is loosely based on , suggests the United States follow this accidental attack with a full-scale attack to force the Soviets to surrender. In contrast, General Black urges that every effort be made to either recall or destroy the American bombers before they reach their targets; otherwise the Soviet Union will respond with an all-out nuclear attack.

Following procedures, the military sends out four fighter jets in an attempt to shoot down the Vindicators, although the military is aware that the jets will have to use their to increase their speed, so that the fighters will run out of fuel, sending the pilots to certain death in the freezing ocean. The attempt is to try to hit the Vindicators or, at least to show to the Soviets that the Vindicator attack is an accident, not a full-scale nuclear assault. Unfortunately, the fighters cannot close on the Vindicators before running out of fuel. They all vainly fire their missiles, but all fail to hit the out-of-range Vindicators. The contacts the Soviet premier and offers assistance in attacking the group. The decline at first but soon decide to accept it.

With the radio open, the President attempts to persuade Grady that there is no war. Grady responds that he cannot accept voice orders at this stage (because it could be Soviet agents imitating the President's voice, or the Soviets could have successfully invaded and captured the President).

At SAC headquarters, General Bogan attempts to stop the attack by supplying the Soviets with tactical information about the Vindicators. Bogan's executive officer, Colonel Cascio, believes the Soviets are playing a trick. Cascio strikes Bogan and pulls the cord from the phone, then attempts to take over command of SAC, falsely claiming that he is acting under the authority of the President. Cascio is apprehended by security officers and Bogan's authority is restored, but precious time has been wasted.

Meanwhile, the Soviet "PVO Strany" air defense corps has managed to shoot down two of the six planes. With information provided by the Americans, the Soviets shoot down two more planes. One bomber and a support plane remain on course to Moscow. General Bogan tells Marshal Nyevsky, the Soviet commander, to ignore Plane #6 (the support plane) because it has no weapons. Nyevsky, who mistrusts Bogan, instead orders his Soviet aircraft to attack all the remaining planes. Plane #6's last feint guarantees that the remaining bomber can successfully attack. Following the failure, Nyevsky collapses.

As the final plane approaches Moscow, Colonel Grady opens up the radio to contact SAC to inform them that they are about to make the strike. As a last-minute measure, the Soviets fire a barrage of rockets to form a thermonuclear barrier in an attempt knock the low-flying Vindicator out of the sky. The Vindicator shoots up two missiles, which successfully lead the Soviet rockets high in the air. Colonel Grady's plane survives.

Grady's wife is put on the radio and attempts to convince him to abort his mission, that the United States has not been attacked. Believing orders that such a late recall attempt must be a Soviet trick, Grady ignores them. Grady tells his crew that "We're not just walking wounded, we're walking dead men", due to radiation from the burst. He intends to fly the aircraft over Moscow and detonate the bombs in the plane. His navigator notes, "There's nothing to go home to anyway".

The Soviet Premier says that this was all an accident. The President disagrees, saying they are both to blame, and that they let their machines get away from them and they must make sure it never happens again.

When it becomes apparent one bomber made it through Soviet defenses and destroyed Moscow (evidenced by the loss of communication with the American ambassador, whose telephone produces a high-pitched whine as it melts in the blast), the President orders an American bomber to destroy , arguing that this is the only way to convince the Soviets that the Moscow attack was a mistake, and to prevent a worldwide nuclear war which will probably destroy humanity. The Soviets stand down their missiles, but the happens to be visiting New York at the time, and presumably will be killed in the blast.

A countdown to drop the bomb is made by a crewman. Simultaneously ten quick scenes of busy New York people and animals appear.

Each of the 10 New York scenes is revisited and freezes. The final one is that of a child's face. Then the film ends.

The film is shot in black and white with a minimalist, documentary-style format, with claustrophobic close-ups, and long silences between the characters. Except for the final "countdown" scenes the action takes place largely in bunkers, conference rooms, and a cockpit. Only in these last scenes do people and animals appear active and "alive" in the normal day-to-day world.

The movie is constructed so that the Soviets are never seen. The action is portrayed only on the giant maps overlooking the War Room in and SAC Headquarters, and the Soviet Premier's words are spoken through an American interpreter (played by ).

Colonel Grady's crewmen show no real emotions as they fly their airplane. They are carrying out preplanned actions, trained not to alter their course. This is a stark contrast to the conventions of "bomber crew movies" such as "Air Force" (1943), where the fliers are portrayed as disparate individuals who, by working together, can change the course of history. The robotic Colonel Grady, grimly flying toward Armageddon despite all pleas to turn back, has had relatively few fictional successors. Major characters in 's novel "Ju-52," 's novel "Chains of Command," the book "" and the 1995 film "Crimson Tide" actively resist direct orders to launch nuclear weapons and are presented as heroes for doing so.

The "Vindicator" bombers (an invention of the novelists) are represented by stock footage of a , which was used because the would not cooperate with the film's producers due to the risky plot lines (and the assertion in the script that its own hardware malfunction brought on the destruction of Moscow and New York).

Underscoring the nightmare quality of the drama, the film features several eerie scenes. Gen. Black's dream about the matador is blurred and shaky; the main title "Fail-Safe" switches starkly back and forth several times between black letters on a white background, and white letters on a black background. When the bombers and fighters are shown in flight, the soundtrack is sometimes eliminated entirely. At another point, the stock footage of the planes is rendered as a photographic negative.

The book so closely resembled the novel Red Alert by Peter George, that George filed a plagiarism lawsuit. The case was settled out of court.

One of the necessary plot elements in "Fail-Safe" is the inability of Colonel Grady's group to hear the correct action message because of Soviet jamming of a digital signal. However, the U.S. Air Force uses radio to transmit to air crews; this has the advantage of not being easily jammed.

Connections with other films and TV

"Fail-Safe" and "" were both produced by in the period after the , when people became much more sensitive to the threat of nuclear war. "Strangelove" director insisted the studio release his movie first (in January 1964). "Strangelove" shares many plot similarities with "Fail-Safe" (and was legally derived from "Red Alert" - see above), but added black humor and satire to the mix. When "Fail-Safe" opened 9 months later, it garnered excellent reviews, but audiences found it unintentionally funny,Fact|date=June 2008 and its box-office was poor.

This movie influenced the story of the ' episode "Defiant". There are similar scenes in the episode, such as those between () and () who coordinate the search for the stolen "Defiant" from a war room on . (Cascio) also appeared in the series, in the earlier episode "Tribunal". (')

The famous 1964 ad Daisy by the Johnson campaign featured a shot similar to the final one from the movie, with a smash zoom into the face of a young girl playing. It implied the use of nuclear weapons. Although it only aired once, the effect was to reframe the election in Johnson's favor, and led not only to a landslide victory, but a huge change in how political campaigns were run, favoring fearmongering over positivity.

In 2000, the novel was adapted again as a televised play also titled "Fail Safe", starring , , and and broadcast live in black and white on .