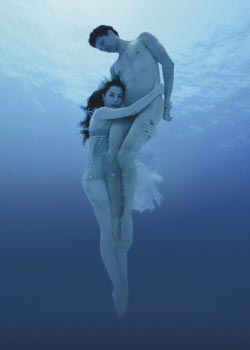 Ondine is a three act ballet created in 1958 by legendary British , Sir for the to music composed by Hans Henze. was choreographed by Sir as a vehicle to highlight the undoubted talents of British , Dame . Someone described it as 'a concerto for Fonteyn', and certainly at its first performances most of the attention was concentrated on her. Other ballerinas danced it a few times, but it is really only since Sir as Artistic Director of the persuaded Ashton to allow him to stage a revival, thirty years later, that audiences have been able to appreciate the overall ballet, rather than just the performance of Fonteyn.

The three act ballet of "Ondine" was the result of a collaboration between German composer and British choreographer, and is thus the only ballet choreographed by Ashton to an original score. Ashton first approached to compose a score after his success with "Troilus and Cressida" (1954). However, Walton refused and suggested that his friend Hans Henze be approached. [cite journal| last = Jones| first = Richard| title = Hans Werner Henze: Composer of 'Ondine' | journal = Ballet Magazine| issue = April 2005 | url = http://www.ballet.co.uk/magazines/yr_05/apr05/rj_hans_werner_henze_ondine.htm| accessdate = 2008-05-06] Therefore, the music for "Ondine" was commissioned from Henze, who went to considerable lengths to learn the special requirements of writing for ballet. Ashton gave him a very detailed breakdown of the action, with precise timings for each section in a similar way to how the famous nineteenth century choreographer, did for . Henze and Ashton met on the island of , just across the bay from , to decide their key approaches to this new ballet.

After its premiere in 1958 it was greeted with mixed, half-hearted reviews

In 1958 the ballet was widely seen as having choreography and décor in harmony with each other but fighting with the music; now it’s the choreography and the music which seem to speak the same language, while the sets look not only backward but to the north.

The consensus on Ashton's 'Ondine' is that it has some very good things in it - and this is true; as is the implication that it is otherwise unsuccessful, not least because the music (which greatly disappointed Ashton himself) largely fails, except in the storm of Act II and the divertissements of Act III. [cite web|url = http://www.onlinereviewlondon.com/reviews/Ondine.html |title = Ondine |publisher = The Times Literary Supplement |last = Grayling |first = A.C.|date = 2005|accessdate = 2008-05-28] According to many critics, the music didn't suit Ashton "who had been hoping for music as "radiant" as the Mediterranean from which its heroine was born"

"Ondine" is not a classical construction with great set pieces (except for the wedding "divertissement" in the third act) or grand formal "pas de deux", but a continuous, flowing narrative. However, this narrative is itself not very strong and there is no real explanation of why the lovers are on a ship in Act 2, or what exactly has passed between Acts 2 and 3 in order to convince Palemon to return to his mortal lover, Berta.

Although the narrative is not strong, the setting is and displays a "most convincing feel of the sea" and the "shimmer of water" which is very effective in this ballet which is filled with images of water and particularly of the sea.

When danced the lead, the ballet was about her and her performance; however good today’s interpreters may be, none has the mystique to reduce everyone else to the background, and so the supporting roles are now much more visible and need to be much more strongly depicted.

The story derives from 's novella "Undine", the tale of a water-nymph who marries a mortal, but Ashton changes the names of all the characters. Similarly to other 19th century fairy tales, the plot is based on man (Palemon) encountering the supernatural (the water nymph Ondine), however the outcome is rather different than many of the 19th century classics: here it is the man that dies, and the female character survives.

The title role is undoubtedly the main focus of the ballet. She is a gentle water sprite and simplicity itself from the moment the audience discovers her dancing in the waterfall and then with her own shadow. Her love for Palemon is deep. This is what makes his unfaithfulness so devastating and dramatic.

The male lead is bewitched by the feminine allure of Ondine. He has never seen a creature as lovely as her and decides to marry Ondine foresaking his betrothed, Berta. In a similar way to the Prince in , Palemon is destroyed by breaking the trust of his intended.

She is the perfect female contrast to Ondine. Ondine belongs to the sea whereas Berta is definitely from the land. She is manipulative, possessive and highly demanding while Ondine is gentle and loving.

He is the uncle of Ondine and also Lord of the Mediterranean Sea. He tries to warn Ondine that what she intends to do with Palemon goes against the what is expected of her. When she chooses not to listen to his advice, he creates the conditions for a shipwreck where she is returned to the sea. When Ondine once again finds Palemon and realises how he has betrayed her, Tirrenio exacts a terrible revenge with his fellow Ondines by causing death and destruction for all Palemon's guests.

The première of "Ondine" was held on the at the , . The orchestra was conducted by the composer himself, while the title roles of "Ondine", "Palemon" and "Tirrenio, Lord of the Mediterranean Sea" were danced by , and respectively.

"Ondine" is a work that disappeared from the repertory of the for twenty years or so before persuaded to let him revive it in 1988.