Document cameras, also known as image presenters, visual presenters, digital visualizers, ("visualisers" in the United Kingdom) digital overheads, and docucams, are real-time image capture devices for displaying an object to a large audience. Like an opaque projector, a document camera is able to magnify and project the images of actual, three-dimensional objects, as well as transparencies.[1] They are, in essence, high-resolution web cams, mounted on arms so as to facilitate their placement over a page. This allows a teacher, lecturer or presenter to write on a sheet of paper or to display a two or three-dimensional object while the audience watches. Theoretically, all objects can be displayed by a document camera. Most objects are simply placed under the camera. The camera takes the picture which in turn produces a live picture using a projector. Different types of document camera/visualizer allow great flexibility in terms of placement of objects. Larger objects, for example, can simply be placed in front of the camera and the camera rotated as necessary,or a ceiling mounted document camera can also be used to allow a larger working area to be used.

Typical applications for a document camera include:

Document cameras replaced overhead projectors, which were formerly used for this purpose. By means of the zoom feature a document camera can zero in on the small print in books and project printed pages as if they were traditional transparencies. Also the room lighting does not have to be darkened to operate a document camera; in a classroom setting this is an asset.[2] Most document cameras can also send a video signal to a computer via USB cable. Sometimes document cameras are connected to an interactive whiteboard (like a Panaboard, Qomo board, Smart Board, Activboard or other brands) instead of a standard screen.

Most document cameras can also be supplied with an accessory so that they can be used with a microscope. According to recent research by Futuresource Consulting over 11k visualisers were sold in UK in 2008 and Futuresource forecasts that over 17,000 will be sold in 2009. The market is valued at £12 million in 2009 increasing 53% in 2010 to £18 million. One in 30 UK school classrooms now have a visualiser. That is expected to increase to 1 in 10 by 2010.

One of the first document cameras from 1974 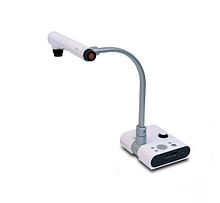 One of the document cameras arranged for teacher's use : 2010

Document cameras were first developed to meet an increased demand for the ability to project and present original documents, plans, drawings and objects directly, rather than necessitating the prior preparation, that would be required for their use as part of an overhead projector based presentation.

The widespread use of computers, projectors, and popular presentation programs such as Microsoft Powerpoint in meeting rooms, meant that overhead projectors became less frequently used. Document cameras continue to provide a convenient and flexible way of allowing documents, books or slides to be spontaneously displayed during presentations as required.

The first attempts and prototypes were mostly simple video cameras on a copy stand. These were assembled and equipped with additional lighting to ensure that they were able to operate in darkened rooms, and also to provide a consistent quality of projected image. The technology of video cameras during this time, was a key factor in the development of document camera systems. Document cameras have also frequently benefited from developments in other industries, which also facilitated significant advances in the field of document camera technology. A good example of this is the technology used in photographic equipment, which has contributed much to the development of the document camera as a high quality presentation tool.

At the end of the 1990s progressive scan cameras were introduced. Today, progressive scan cameras have largely replaced video cameras and the initial challenges in this technology have been virtually eliminated. Many visualizers available on the market are capable of at least 20 frames per second output, and high-end models are capable of 30 frame/s to present images in various resolutions and aspect ratios.

The design and specification of a document camera are a combination of several different technologies. The quality of the recorded image is dependent on the primary components, which are: optics, camera, lighting system and motherboard with appropriate firmware (software). The finished product is then realised by the production of different mechanical designs by individual manufacturers. Today High-Definition Document cameras are avaialble with HDMI output, Audio/Video recording and playback is possible, and some High-Definition document cameras are also using high-speed WIFI technology to eliminate the need to wires.

Optics are one of the most critical components relating to image quality, and the quality of the optical system used will largely depend on the planned cost of the device. Simple or highly complex optical systems can be used, which can differ significantly in both quality and size. The iris or aperture is another important component of the optics. The iris controls and regulates the amount of light that passes through the lens onto the image sensor. A lens will focus on exactly one point of an object to be imaged onto the sensor. However there is also an area in front of and behind the point of focus that will be perceived as being in sharp focus by the human eye. This is called the depth of field, and it is dependent upon the size of the iris or aperture. (the smaller the aperture, the greater the depth of field).

Basically, image sensors provide only monochrome images. With a 1-chip camera, colour information can be easily obtained through the use of colour filters over each pixel. With 1-chip cameras, the so-called Bayer filter is very common. Red, green and blue filters are arranged in a pattern. The number of green pixels is twice as large as that of the blue and red, thus the higher sensitivity and resolution of the human eye is replicated. To get a colour image, different algorithms are then used to interpolate the missing colour information.

A 3CCD camera module is another way to produce colour images. A prism is used to split white light into its red, green and blue components and a separate sensor is then used for each colour. This complex camera technology is used in 3-chip cameras and allows for excellent colour reproduction at very high resolutions.

Modern camera systems used in a document camera are able to provide high-resolution colour images at 30 frames per second. In a 3-chip camera, the measured resolution may be up to 1500 lines. In addition the image can be adapted to fit common display aspect ratios of 4:3, 16:9 and 16:10.

Lighting is an essential part of a document camera. To ensure good colour rendition, the lighting system used to illuminate the image capture area should be as uniform as possible. The greater the light intensity, the more independent the document camera is from ambient light sources. Using powerful lighting systems enables smaller apertures to be used, and this in turn provides a significant increase in the depth of field that can be achieved by the document camera. Also the higher the quality of the light source, the more light that will reach the camera sensor, and this results in less noticeable noise, and therefore the quality of image is not degraded.

Some document camera models integrate additional functionality into the light system, such as a synchronized light field that clearly indicates to the user at all times, by way of an illuminated image capture area or laser markers, the size and position of the imaging area, which adjusts simultaneously as the lens zooms in or out.

The motherboard plays an important role in image processing and it has a major influence on the quality of the eventual image that is produced. Larger and larger resolutions and high refresh rates generate large amounts of data that must be processed in real time.

Document cameras have a wide variety of sophisticated automated systems that are designed to make the user experience as easy as possible. Permanent autofocus detection, for example, automatically adjusts the focus settings when a new object is displayed, with no need for user intervention. Other important features include automatic auto iris, auto exposure, auto white balance and automatic gain control.

A document camera needs an image display device to show the information to the audience. Modern motherboards have a variety of connections to ensure flexibility of use. In addition to HDMI, DVI, VGA and video ports for connecting to displays, (projectors, monitors and video conferencing systems) there are also several interfaces provided to facilitate connection to a computer or interactive whiteboard. These interfaces are most commonly USB, Network (LAN) and serial.

In addition, an external PC or laptop can easily be connected to the document camera to allow for easy switching between a Power Point presentation and a live demonstration. Some models can also handle external storage devices and play files directly from a USB flash drive, or save snapshots during the presentation onto it.

Some document camera manufacturers also provide for regular firmware upgrades, allowing users to have the opportunity to be equipped with, and benefit from new features as they become available.

There are many different types of document camera,which generally can be divided into three groups. Some are portable, larger ones are desktop models, and another group includes the ceiling cameras that mount above podiums in auditoriums.

Portable and desktop models allow a similar working environment to that of an overhead projector. The switch to the new technology is easy and many users appreciate the added flexibility in terms of the variety of usable objects that can be displayed. These devices are often portable and can be used in multiple locations without requiring any prior special installation.

Ceiling-mounted document cameras/visualizers are an variation from the traditional desktop models and allow for much larger objects to be displayed. There is no desktop technical equipment to restrict the views of speaker and audience,as the technology is installed unobtrusively in the ceiling. Ceiling models are often used to support telepresence systems(high end video conferencing), as they allow the illusion to be created that all participants on the conference call are sitting together in the same room.

Today, document cameras are seen in most classrooms.[3]

All students have a better view of the information that the presenter is sharing with the class. Its use brings an end to the days of children pushing and shoving to gain a better view of a teacher-demonstrated science experiment. Furthermore, a document camera is a great classroom management tool. For example, the teacher can use the document camera to display a kitchen timer while the class is working in groups or independently. A picture schedule can also be displayed to help English Language Learners understand directions. By allowing all students to view an item simultaneously, document cameras also have the ability to streamline show-and-tell. The presenter does not have to walk slowly around the room to show everyone his or her treasure.[4][5]

Activities or uses for the classroom

Document cameras are user-friendly. Many of the uses listed can be utilized and adapted for any grade level: