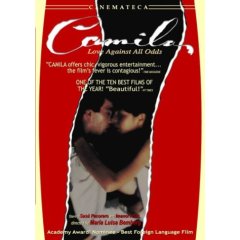 "Camila" is a 1984 Argentine film directed by , based on the story of the 19th-century Argentine socialite . It was nominated for the .

It is 1847 and (), a pillar of society, belongs to a family which enthusiastically supports . She is engaged to Ignacio, a wealthy man with whom she is not in love. When her fellow socialites advise her to not let Ignacio get away, she describes her longing for a husband she could love and feel proud of. Secretly, she reads literature critical of the regime by author . She also openly speaks her views, which enrages her father. One day, during , she meets a priest, Father Ladislao Gutiérrez (). Camila immediately develops a crush on him, but after hearing Fr. Ladislao denounce Rosas' from the pulpit, she falls deeply in love. Fr. Ladislao first attempts to beat his feelings for Camila out with a whip, but finally surrenders to her advances. They begin a clandestine affair.

They escape the family and elope to , where Fr. Ladislao poses as a school teacher. While Camila is ecstatic with happiness, Ladislao is torn between his love for Camila and longing for the duties of the priesthood. They are identified, however, during an celebration by Father Gannon, a priest who knows them both. The village commandant informs Camila that he will not arrest her until morning and advises her and Ladislao to cross into . However, Fr. Gannon's words about how, "God does not forget his chosen," has brought Fr. Ladislao's conscience to a crisis. He runs to the village church and screams at the , demanding to know why cannot leave him in peace. However, he decides that he must return to and do penance before his Bishop. The resulting delay prevents him and Camila from escaping and leaves the commandant with little choice other than to arrest them.

Meanwhile, Camila's father, Adolfo O'Gorman, is enraged by how the family name has been dragged through the mud by Camila's actions. Despite the pleas of Ignacio and the rest of the family, he writes to Rosas and demands the for his daughter. With both the Church Hierarchy and his political allies demanding blood and his exiled opponents using the scandal to mock his rule, Rosas orders Camila and Fr. Ladislao to be shot without trial.

In a military prison, Camila and Fr. Ladislao are forbidden to see each other. While imprisoned, Camila learns that she is carrying Fr. Ladislao's child. Despite the fact that the forbids the execution of pregnant women, Rosas refuses to delay or commute Camila's sentence. Before they are confronted by a , the prison chaplain gives Camila to drink and thus baptizes her unborn child. Fr. Ladislao sends her a final letter affirming his love for her and saying that, because they could not be together on earth, they will be reunited in before the throne of .

Although the guns down Fr. Ladislao without a second thought, they initially refuse to kill a woman. When their Captain threatens to kill them if they refuse, they open fire and shoot Camila in the stomache. Their bodies are then dumped into the same coffin. The couple's final words are told once more in . "Ladislao, are you there?" "I am right here next to you, Camila."

*The story had previously been adapted in 1910 by , the now considered "Camila O'Gorman".
*This was Argentina's second nomination in history to an .