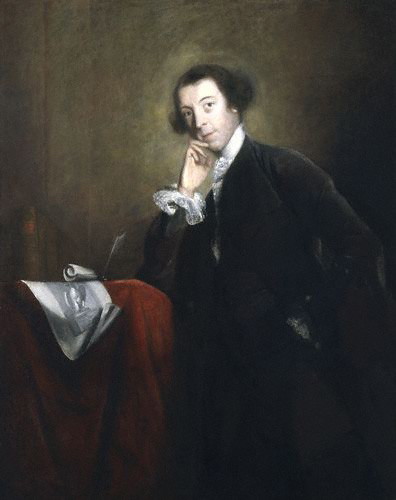 Horace Walpole, 4th Earl of Orford (, &ndash; , ), more commonly known as Horace Walpole, was a politician, writer, architectural innovator and cousin of Lord Nelson. His "Letters" are highly readable, and give a vivid picture of the more intellectual part of the aristocracy of his period.

He was born in , the youngest son of British Prime Minister . Like his father, he was educated at and .

After university, Walpole went on the with the poet , but they quarrelled, and Walpole returned to England in 1741 and entered Parliament. He was never politically ambitious, but remained an MP after the death of his father in 1745.

Following his father's politics, he was a devotee of King George II and Queen Caroline, siding with them against their son, Frederick, Prince of Wales, about whom Walpole wrote spitefully in his memoirs.

Walpole was a frequent visitor to , , to meet both the Boyle-Walsinghams and Lord Hertford.

In 1764, he published his , "", setting a literary trend to go with the architecture. From 1762 on, he published his "Anecdotes of Painting in England", based on 's manuscript notes. His memoirs of the Georgian social and political scene, though heavily biased, are a useful primary source for historians.

In "Historic Doubts on the Life and Reign of King Richard III", Walpole defended Richard III against the common belief that he murdered the . In this he has been followed by other writers, such as and .

The Orford Walpoles were not related to the popular Twentieth century novelist, (1884–1941).

Walpole's has been the subject of speculation. He never married, engaging in a succession of unconsummated flirtations with unmarriageable women, and counted among his close friends a number of women such as and Mary Berry named by a number of sources as .

Formal styles from birth to death

His Legacy at Eton

*Walpole lends his name to a boarding house (Also known as MNF) at his alma mater,