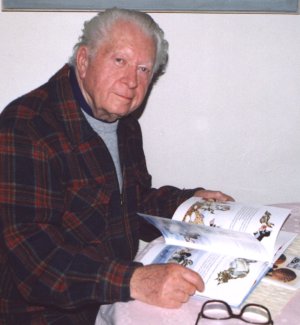 Zdeněk Miler ( ) Czech animator and illustrator best known for his "Mole" ("Krtek" or "Krteček" in original) character and its adventures.

Miler was born in just west of what was then . He became an animator partly because of the Nazi occupation of Czechoslovakia. He took part in the demonstrations held because of the death of that lead to the closing of universities and colleges.He was fortunate enough not to be sent to a . Instead he wound up working as an animator.

Miler enjoyed painting as a child. His hobby developed when he joined the national graphic school in Prague in 1936. He later studied at the College of Arts and Crafts (uměleckoprůmyslová škola Praha). In 1942 he began work at the cartoon studio in . There he learned the important practical skills relating to film production specializing in animated films. After the second World War, he started work at the cartoon company Bratři v triku and worked first as draughtsman then author and director. He later became the head of the company.

Miler made about 70 films. In approximately 50 of them, the protagonist was his most famous creation, the small mole (Krtek in Czech). The idea for its creation came when he was commissioned to make an educational film for children in 1956. He was not happy with the script he was given. Since he was strongly influenced by Walt Disney films, he looked for an animal as the main character. Later, he said that the idea to use the mole as his main character came to him when he stumbled over a mole hill during a walk. The first film was titled “How the mole got his trousers” (“Jak krtek ke kalhotkám přišel”), which won a silver lion in Venice. In the beginning, the mole spoke. But Miler wanted his mole to be understood everywhere in the world so he decided to use his daughters as , reducing the speech to short non-figurative exclamations in order to express the mole's feelings and world perception. His daughters were also his test audience, who got to see the films first. Thus Miler could see whether his message resonated with children.

Krtek was a huge success in Czechoslovakia, Eastern Europe and Germany from the beginning and today the mole can be seen in over 80 countries.