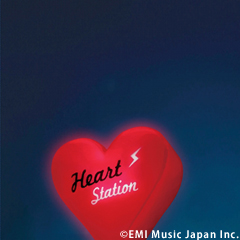 "HEART STATION" will be the 2008 commercial song for Recochoku.The "Heart Station" Recochoku CM began airing on 12p.m. January 25, 2008 in Japan and features original footage and imagery of Utada shot last year in December 2007 [ [http://utada-online.net/blog/?p=161 U.Blog » “HEART STATION” Recochoku CM O.A. 01.25 ] ] . The video, entitled "PON PON Kumachan," became available for download according to her Japanese site on the same day [ [http://utada-online.net/blog/?p=163 U.Blog » “PON PON Kumachan” Video for Download ] ] . On January 26, 2008, her official Japanese site launched a special "Heart Station" website with the single's information as well as blog parts to place the "PON PON KUMACHAN" video on fan's blogs. There are also links to several radio stations across Japan, presumably some promotional agreement between "Heart Station" and various FM channels, with some boasting individual "Heart Station" stickers, indicating each as a "special" Heart Station [ [http://www.emimusic.jp/hikki/heartstation/index_j.htm 宇多田ヒカル 「Heart Station」Special Site ] ] . The "flying" date of the single's release, , , caused some Japanese-resident purchasers to not only receive the first press edition grid of stickers, but also a bottle of ASCIENCE shampoo at some CD MAXI shops (the tie-in product of "Stay Gold") [ [http://utada-online.net/blog/?p=196 U.Blog » “HEART STATION/Stay Gold” On Sale Now ] ] . The single debuted at #2 with 14,882 units sold its first 24 hours.

On , , Space Shower TV officially stated that Utada’s “Heart Station” music video will be directed by Japanese videographer Muto Masashi who has work with many popular artists.

The video features Utada, simply attired in a white top, jeans, and white headphones, singing on a train filled with black-clad, mysterious people until she arrives at her destination(presumably the director's reference to another form of "Heart Station"). Less noticeable elements that relate to the song include the track lights that follow a heartbeat-like pulse as the train travels along. Also, when the video is shown in a first-person perspective of the viewer, the people appear to be pitch black but whenever it switches to Utada's perspective, us seeing through Utada's eyes, we see the passengers in full color.

"Stay Gold" was downloaded just over 250,000 times by the end of the December 2007 month, meaning it was the fourth in the monthly rankings for RIAJ's Chaku-Uta Ringtones. It had its greatest success at radio for debuting at #1 on Hot Express' Daily FM chart for the week it debuted, and reaching a high #7 on the Tokio Hot 100 Singles Airplay chart, but rather quickly descended most radio rankings it had peaked mostly in the Top 3, 20 or 40 of after achieving the latter peak, somewhat akin to "Kiss & Cry."The physical single shot straight onto iTunes Japan Albums download chart at #2 the same day it was released while the two A-sides "Heart Station" & "Stay Gold" debuted back-to-back in the Top 3 of Itunes Japan Top Songs at #2 and #3 respectively.

In all of her performances of Heart Station, Utada has featured prominent ad-libbing in the beginning of the song and in the ending, in which she sings variations of the line, "This is from the bottom of my heart," twice. It is unknown if she will continue this pattern in future performances.