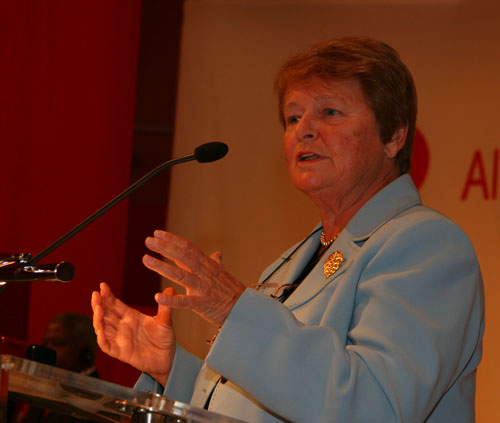 Audio|Gro Harlem Brundtland.ogg|Gro Harlem Brundtland (pronounced|ɡru: hɑ:ɭɛm brʉntlɑn:) (born Gro Harlem 20 April 1939, ) is a Norwegian politician, diplomat, and , and an international leader in and . She is a former , and has served as the Director General of the . She now serves as a for the .

Brundtland was educated as a Medical Doctor (cand. med.) at the in 1963, and at in 1965. From 1966 to 1969, she worked as a physician at the Directorate of Health ("Helsedirektoratet"), and from 1969 she worked as a doctor in Oslo's public school health service. She was Norwegian Minister for Environmental Affairs from 1974 to 1979, and became Norway's first — and to date only — female Prime Minister. She served as Prime Minister from February to October in 1981.

Brundtland became Norwegian Prime Minister for two subsequent terms from 9 May 1986 until 16 October 1989 (This cabinet was internationally renowned for its large percentage of female ministers. Eight of the eighteen total were female,) and from 3 November 1990 until 25 October 1996, when she resigned and retired from Norwegian politics, and was succeeded by . She resigned as leader of the in 1992.

Gro Harlem Brundtland is a member of , the Norwegian Humanist Association.

Brundtland was elected Director-General of the in May 1998. In this capacity, Brundtland adopted a far-reaching approach to public health, establishing a , chaired by , and addressing as a major public health issue. Brundtland spearheaded the movement, now worldwide, to achieve the abolition of cigarette smoking by education and persuasion.

Under her leadership, the World Health Organization was one of the first major employers to require freedom from tobacco addiction as a condition of employment. Brundtland was recognized in 2003 by as their "Policy Leader of the Year" for coordinating a rapid worldwide response to stem outbreaks of SARS. Brundtland was succeeded on 21 July 2003 by . In 1994. Brundtland was awarded the Charlemagne Prize of the city of .

In 2004 the British newspaper "" listed Brundtland the 4th most influential European over the last 25 years, behind , and . Fact|date=March 2008

In 2006 Brundtland was a member of the Panel of Eminent Persons who reviewed the work of (United Nations Conference on Trade and Development.) In May 2007, the UN Secretary-General named Brundtland, as well as (the former ), and (the former foreign minister of ), to serve as UN Special Envoys for Climate Change. [ [http://www.guardian.co.uk/uslatest/story/0,,-6623190,00.html U.N. Envoys Seek Input on Climate Change] , "The Guardian", 10 May 2007]

On 18 July 2007 in , , , , and convened a group of world leaders to contribute their wisdom, independent leadership and integrity to tackle some of the world's toughest problems. Nelson Mandela announced the formation of this new group, The Elders, in a speech he delivered on the occasion of his 89th birthday.

Archbishop Tutu will serve as the Chair of The Elders. The founding members of this group include Brundtland, , , , , , and .

“This group can speak freely and boldly, working both publicly and behind the scenes on whatever actions need to be taken,” Mandela commented. “Together we will work to support courage where there is fear, foster agreement where there is conflict, and inspire hope where there is despair.”

The Elders will be independently funded by a group of Founders, including , , ; Michael Chambers; Bridgeway Foundation; , Humanity United; Amy Robbins; , Dick Tarlow; and .

Gro Harlem Brundtland has attended the meetings, and she is a member of the . [en [http://www.clubmadrid.org The Club of Madrid] an independent organization dedicated to strengthening democracy around the world by drawing on the unique experience and resources of its Members – 66 democratic former heads of state and government.]

Brundtland received an operation for in 2002 at [no icon [http://www.vg.no/nyheter/innenriks/norsk-politikk/artikkel.php?artid=508236 VG.no:Betalte operasjon i 2002] ] . In 2008 it became known that during 2007 she had received two treatments at Ullevål, paid for by Norwegian public expenditures. Since she had previously notified the Norwegian authorities that she had changed residence to , she was no longer entitled to benefits of Norwegian . Following intense media attention surrounding the matter, Brundtland decided to change residence once more, back to Norway, and she also announced that she would be paying for the treatments herself. [no icon [http://www.vg.no/nyheter/innenriks/artikkel.php?artid=509666 VG.no:Gro flytter hjem] ]