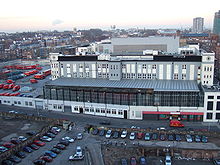 It is located in the Mount Pleasant area in Clerkenwell (EC1), at the junction between Farringdon Road and Rosebery Avenue and opposite Exmouth Market.

It was officially opened on 30 August 1889 when the Post Office Sites Act was passed by Parliament. It was built on the location of the former Coldbath Fields Prison, that ceased to function in 1885. The original prison gate was incorporated into the post office and not demolished until 1901. The remaining sections of the prison were demolished in 1929, when the new wing was built as an extension to the Letter Office.[1] At the beginning of the 20th century, Mount Pleasant was being referred to as "probably the largest sorting office in the world".[2] At one point all mail sent to or from London came through Mount Pleasant.[3]

From 1927 to 2003 Mount Pleasant was connected to other major Royal Mail offices and railways stations in London via the London Post Office Railway. In the 1970s, it pioneered the use of Optical Character Recognition for sorting purposes with the installation of a machine in 1979.[1]

Mount Pleasant hosts the British Postal Museum & Archive, located in Freeling House on the back of the sorting office.