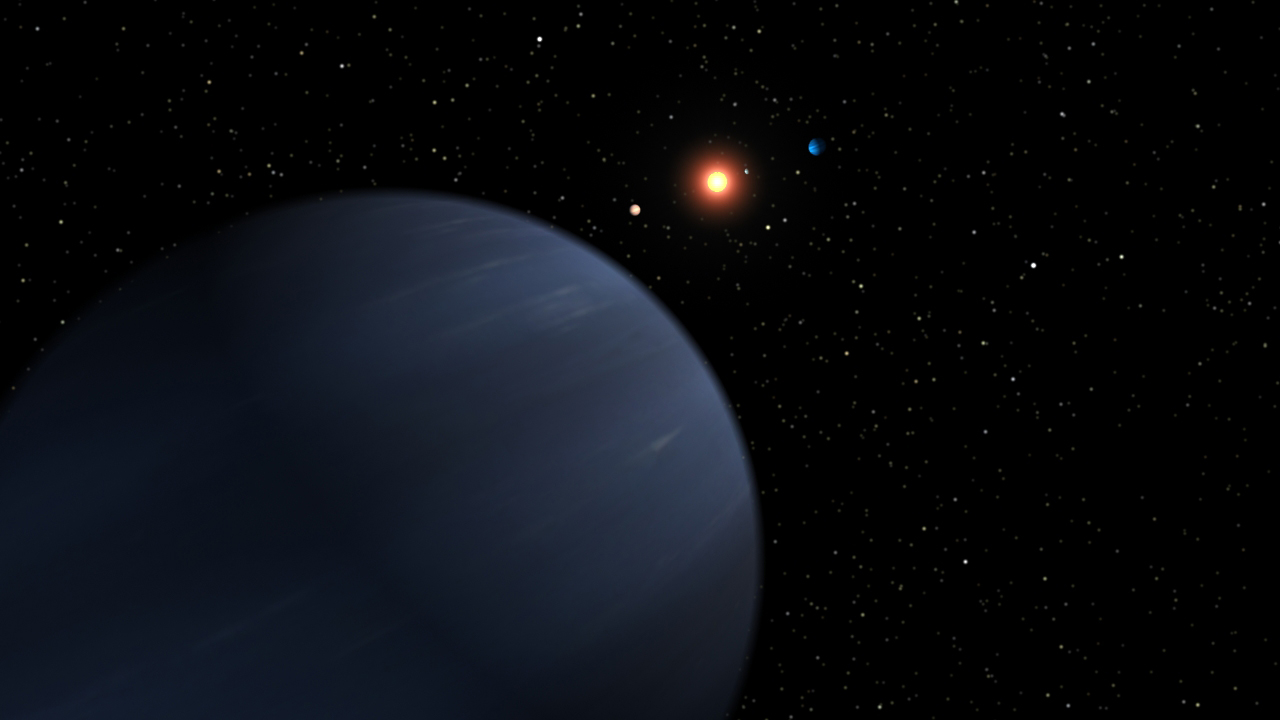 55 Cancri f, also referred to as Rho1 Cancri f, is an approximately 41 s away in the of Cancer (the ). 55 Cancri f is the fourth known planet (in order of distance) from the star and the first planet to have been given the designation of "f". [cite web|url=http://astrobiology.nasa.gov/articles/researchers-identify-first-five-planet-extrasolar-system/ |title=Researchers Identify First Five-Planet Extrasolar System |publisher= NASA Astrobiology |date=2007-11-12|author=Shige Abe |accessdate=2008-09-17] As of September 2008, this makes 55 Cancri the only outside the that is known to contain at least 5 planets. [cite web|url=http://exoplanet.eu/catalog-all.php |title=The Extrasolar Planets Encyclopaedia |publisher=Exoplanet.eu |date= |accessdate=2008-09-14]

The initial presentation of this planet occurred at a meeting of the in , [cite journal |author=J. Wisdom |url=http://www.aas.org/publications/baas/v37n2/dda05/29.htm |archiveurl=http://web.archive.org/web/20061216012023/http://www.aas.org/publications/baas/v37n2/dda05/29.htm |archivedate=2006-12-16 |title=A Neptune-sized Planet in the rho1 Cancri System |accessdate=2008-09-17 |publisher=The American Astronomical Society |date=2005-04-11| journal=DDA 36th Meeting, 10-14 April 2005—Session 5 Posters] however it was another two and a half years before the planet was to be published in a peer-reviewed journal. Unlike the majority of known extrasolar planets, 55 Cancri f was detected by a third party, by reviewing already-published data on the star and analyzing observed changes in its (obtained by measuring of the of the star's ).

Astrometric observations made with the suggest that the outer planet is inclined at 53° with respect to the plane of the sky. [cite journal |url=http://www.obspm.fr/encycl/papers/mas_caps_final_formated.pdf |author=Han, I. et al.|title=Preliminary Astrometric Masses for Proposed Extrasolar Planetary Companions|journal=|volume=548|pages=L57 &ndash; L60|year=2001|doi=10.1086/318927] If these measurements are confirmed and the system is assumed to be coplanar, the of the planet would therefore be about 25% greater than this lower limit, at around 0.18 Jupiter mass.

Since the planet was detected indirectly through observations of its star, properties such as its , composition and are unknown. With a mass half that of ,