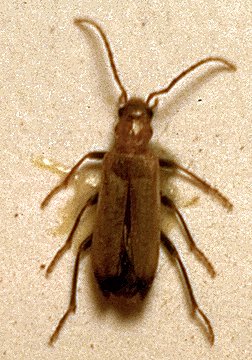 image_size = 200px
regnum = ia
phylum = a
classis = a
ordo =
familia =
genus = ""
species = "N. melanuara"
binomial = "Narcerdes melanuara" This is thought to be a native to the region of North America and has been reported to cause much damage to dock timber in this region. Also in America, Drooz (1953) reported that the insect was responsible for very costly damage to foundation piling underneath buildings in Milwaukee, Wisconsin.

The female of this beetle will lay eggs in any damp, rotten timber, which has been attacked by fungus. The e, brown in colour, bore into the timber and feed on the wood.

The adult insects, around 10-12 mm in length, can be found anywhere where there is wet or damp wood, such as wharf timbers regularly submerged by a tidal flow such as the .

Buried pieces of wood may also harbor the insects. It was said that there was an increase in numbers of this insect in London following the Second World War, when masses of timber became buried under the ground following bomb blasts.

The development time from egg to adult is about 12 months & adults tend to emerge around June to late August in the U.K. The adults can fly/crawl into buildings in quite large numbers so that the occupants think they are being invaded by cockroches. The beetles themselves are quite harmless & one feature that distinguishes them from cockroaches is the black band across the end of both elytra, or wing covers. On closer study another feature are three raised longitudinal lines on each wing case - a feature common to all beetles in the family . There are only seven species of this family in the UK.

In general size and form they resemble s found on flowers.

On a pest control issue, often very little can be done about the larvae unless the source of damp wood can be found. The beetles which generally are only a nuisance between June to August can be controlled by the application of a residual insecticide to the wall/floor junctions of dwellings/offices, such as .