The wigeons are dabbling ducks in the genus Anas. There are three species: the Eurasian Wigeon (Anas penelope), the American Wigeon (A. americana) and the Chiloe Wigeon (A. sibilatrix). Widgeon is an alternative, though archaic, spelling; the American Wigeon has in the past been known as Baldpate. All three are similarly shaped, with a steep forehead and bulbous rear to the head. Males have a distinctive breeding plumage, in their eclipse plumage they resemble females, which are similar in appearance year-round.[citation needed] The three species' closest relatives within the genus Anas are the Gadwall and the Falcated Duck.[1] All three wigeon species hybridise in captivity,[2] and American and Eurasian Wigeons hybridise in the wild.[3] An American Wigeon × Mallard hybrid has also been recorded [4] 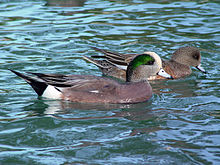 Photographs of hybrid wigeons can be seen here and here.