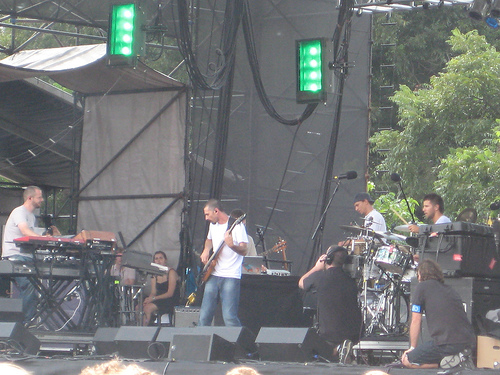 STS9 ("Sound Tribe Sector 9") is an band who are known for their live performances. The band’s genre-blending sound is based heavily on and crossed with elements of , , psychedelia, and hip hop. Self-described as " ". The band mixes standard live rock instrumentation with electronics, favoring group over individual solos. [cite web|url=http://www.kyndmusic.com/2006/10/09/sts9-talks-as-time-changes| title= STS9 Talks As Time Changes by Dave Terpeny, October 9, 2006]

STS9 has released five studio albums, one remixed album, and one live (Live As Time Changes) on their own label 1320 Records. As an independent artist, they have succeeded by using their live performance to conduct multiple tours and appear at . They have achieved significant niche popularity in a few areas of the country through frequent appearances, most notably in greater including ; the greater area including ; and the greater area including .

For their live performance, STS9 is joined by other members of the Sound Tribe family. The lights are directed and controlled live by Saxton, whose further enhances the mood of the band’s music. In addition, live painters such as J. Garcia and Kris Davidson create an interpretive art piece to catch the essence of the performance. art by is often seen adorning the stage, along with a selection of large, beautiful .

STS9 was formed in in the late '90s, but relocated to in late 2000. For a short period of time, the band was a 4 piece until Jefree Lerner joined in early 1999. The band's name has evolved over time. The band's original name from their first two albums was , but due to copyright conflicts with a pre-existing longboard company of the same name, was changed to "Sound Tribe Sector 9". Sector 9 is a reference to the current era on the Mayan calendar. Since the release of Artifact in early 2005, the band has promoted themselves full-time under their named initials "STS9". Commonly addressed in speech as either "Sound Tribe" or "STS9"

During the past 2 or 3 years STS9's compositions have moved farther and farther from the aesthetic to embrace elements of genres as diverse as electro, , Rock, and IDM. One example of their newer direction is "Somesing" (from 2005's Artifact [http://www.amazon.com/dp/B0007GAEK8] ), a 7 minute long composition with the textural changes of a classical piece. More and more of their compositions now include digital elements and vocal samples, often from the singer Audio Angel. [http://audioangel.org/] Still, the vocals are usually limited to a few lines within one section of a song. The fact that much of STS9's music is instrumental has been cited by Jeffree Lerner as allowing each listener their own "adventure" or interpretation of the song. [http://soundtribe.org/faq.html#int]

In early 2005, the band released Artifact. [ [http://www.jambase.com/headsup.asp?storyID=6064 STS9 ARTiFACT (1320 Records '05), Jambase.com, January 1, 2005] ] In Fall 2006, the band released their first on their label, a concert performance recorded live at the Tabernacle in . STS9 also maintain their own independent web site where they have released hundreds of live soundboard recordings, as well as the band's studio releases. [ [http://www.jambase.com/headsup.asp?storyID=5279 STS9 Launches Music Portal For Downloads, Jambase.com, July 8, 2004] ]

STS9's music resists easy classification. One helpful analogy is to the title track of the album Nefertiti, where the rhythm section essentially replaces the melodic instruments as the driving improvisational force. In the same way STS9's compositions and improvisations (especially from the early part of their career) are driven by their drummer and percussionist, often against a static melody repeated by the guitarist/keyboardist. This is keeping with the tradition of much music, which often features complicated drum patterns under relatively simple melodies and harmonies. Despite the harmonic simplicity of much of their work they are capable of a high level of rhythmic sophistication.

STS9 is also known for their affiliation with the "Mayan Calendar" and "The Law of Time". The "Natural Time Calendar" is a growing global movement to change the world standard away from the . "The Law of Time" is a formula developed by that defines the mathematical ratio of 13:20. From 1998 through 2001, STS9 performed special live shows on the "Day Out Of Time", the name of the last day of each year of the Natural Time Calendar.

STS9's concerts feature rotating set lists, remixed songs, and extended improvisational sections. Typically, the band will play over 120 minutes of music, spanning two sets and an encore; a run of multiple shows in one town will rarely have a song performed more than once. Improvisations, a highlight of STS9’s concerts, usually come from subtle melodic and rhythmic shifts supported by multiple band members, rather than solo performances. This is a notable contrast with typical .

Since early 2005, the band has moved towards more structured compositions. The band has decreased its emphasis on improvisation and extended jamming in concert, and increased its focus on composition, arrangement, and power. As of 2008, the band is moving towards greater amounts of segues.

The audience is an integral part of the concert, and their reaction influences the performance. According to their FAQ [http://soundtribe.org/faq.html] , their original concept for live performance was ‘centered around extended improvisation and the attainment of a higher collective consciousness through the trance state generated by their music.’

STS9 sometimes partners with for their tours. Over the last several years, they have partnered with to bring food drives to various concerts on their tour. Fans are encouraged to bring canned goods to the concert. In exchange for their donation, STS9 and thank patrons with limited edition art work posters, often created by the same artists who accompany the band on stage. In 2005, STS9 put on a where they raised over $20,000 for victims

Beginning in Fall 2006, as part of their "Live as Time Changes" tour, STS9 traveled across the country in a carbon neutral tour bus and powered their live concerts using . The band hoped to offset 100%, or about 138,000 pounds, of their carbon dioxide emissions from their tour by donations of from their partnership with environment-friendly companies. [cite web|url=http://www.jambase.com/headsup.asp?storyID=9215| title= STS9 OFF-SET EMISSIONS, September 26,2006]

STS9 has gained significant popularity in the past few years (their 2005 album Artifact reached #12 on 's Top Electronic Albums) [ [http://www.allmusic.com/cg/amg.dll?p=amg&sql=11:r94uak8kkm3n~T5 AllMusic Guide chart information] ] . They have moved from small clubs to headlining music halls and playing at large festivals. In 2006, the band reached new heights by headlining their first amphitheater performance at in Fact|date=May 2007. A special concert scheduled for the night before at the Fox Theater in sold out in less than fifteen minutes Fact|date=May 2007. They recently sold out their second night of their 2008 two night stay at Red Rocks.

has been home to various members of the band since moving to California. The band has performed at the Catalyst on 9 occasions since 2002, including two 2-night stands. Previously, the band had been frequently playing until it closed in 2002. In 2003, the band headlined the Santa Cruz Civic Center.

In their home state of Georgia, the band continues to ride their popularity. On October 3, 2006, the band marked the 9th Anniversary of their first ever show with a celebration at the historic Georgia Theatre in . The band has performed many 2-night stands at the Georgia Theatre since 2002. For the last three years in , they have performed at the Tabernacle on as part of a 3-night stand, and extended the run to four nights in 2007 and 2008.

STS9 frequently performs at , including special late night concerts that take place from midnight until sunrise. These concerts are often over 180 minutes in length, allowing the band the 13 moon calendar and natural time, and healthy living. The 2002 event included additional performances from Ming and FS, DJ Spooky and GFE. The 2003 event included additional performances from the Progression Sessions Tour with LTJ Bukem, MC Conrad, Makoto, Deeizm, as well as Burning Spear.

In 2007, STS9 announced they would return to Deerfields for a new festival titled Re:Generation. The two-day festival included additional performances from Prefuse 73 and Telefon Tel Aviv. According to the bands web site, this event promised to be "a unique celebration of music, nature, family, mind, body, and spirit."

On Saturday June 7, 2008, STS9 headlined the Sun Down Stage at the Wakarusa Music Festival which was held at Clinton State Park in Lawrence, Kansas.

At Rothbury 2008, STS9 performed an energetic and enthusiastic three and half hour show, which packed a capacity crowd. Even though the headlining Dave Matthews Band was performing directly before STS9, the crowd was still at capacity before STS9 began, creating a long traffic jam which ended at STS9's venue.

On several occasions, STS9 has billed themselves under the name Tzolkin. A promotional flyer put out by the band advertising the 2001 performance reads: “A New Sound Expression” from Sound Tribe Sector 9. Tzolkin is all 5 members of STS9. These very experimental concerts have been used to debut brand new material in a live setting without having the audience expectation of hearing existing STS9 material. The term "Tzolkin" means "sequence of days" and refers to a 260-day harmonic module calendar cycle.

Landscape and Breathe is STS9 members David Phipps (keyboards/laptop) and Hunter Brown (guitar/laptop/midi keyboard). Landscape and Breathe is very similar to the sound of STS9. Steeped in ambience and without drums and bass, the sound is softer and lighter. This side project has been known to work through raw material and ideas that eventually become real STS9 compositions.

Landscape and Breathe is credited with producing 4 songs on the STS9 2005 release "Artifact". The duo also contributed 4 different songs to the Low Pro Lounge 2004 release, "The Most Hi-Fi". Other Landscape and Breathe compositions can be found on the STS9 2004 release "Live At Home", although the songs are credited individually to Phipps and Hunter.

A new album is in the works, and may be released sometime 2009.

L.I.F.E. (Love In Full Effect) was a short lived side project that included STS9 member Zach Velmer (drums) plus Max Malone (drums, bass) from The Free Energy Project. According to the band: The intention of L.I.F.E. is to perform music as an uplifting experience of transformation to a higher vibration of love. Through selected tones and rhythms, the music is performed as a cycle of life recognizing our journey from birth to death, spring to winter, as circle, vibrating higher after each revolution to experience Love In its Fullest Effect. [ [http://www.jambase.com/headsup.asp?storyID=1840 Love In Full Effect, Jambase.com, January 4, 2002] ]

Root Science was a short lived side project that included STS9 members Zach Velmer (drums) and David Murphy (bass). The band also included DJ James Christopher, lyricists Lost and XQR, and female vocalist Syrene. A promotional flyer put out by the band advertising the event reads: “Root Science is a classic drum and bass tracks interpreted live in an improvisational atmosphere. As a group, the performers will recreate and simultaneously reinvent the sounds at the roots of the modern jungle.”

Sound Tribe will be at hand when particles are combined in the near future. This is a major breakthrough in technology and STS9 is excited to be a part of it.