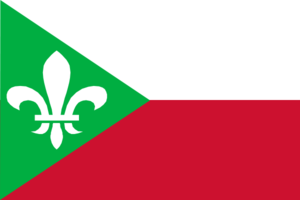 Zundert (Pronunciation|Nl-Zundert.ogg) is a and a town in , the .

After the municipal redivision in 1997, Zundert was expanded with the former municipality of .

The origine of the town Zundert is like many others, very unclear. The name is first encountered in a certificate 1157, in which the Bishop of Luik, confirms a donation from the place "Sunderda".This Sunderda actually relates to the current attachment of Klein-Zundert(Small-Zundert), which was home to some of the first settlements in the area. The monks there, besides their religious labour, were also involved in the grubbing of the, in that time, still rough territory. Which was filled with swamps, peats and heathland fields. The monks also helped improve the agricultural methods.

Zundert is still surrounded by a rural environment with beautiful nature areas, one of them is the "Buissche Heide", a magnificent heathland area with unique walking possibility.

Zundert, Achtmaal, Klein Zundert, Wernhout and Rijsbergen were all liberated on October 25, 1944 by the 415th regiment of the American 104th Infantry Division, "the Timberwolf Division".

At a small distance from the town, an old tavern called "In Den Anker" can be found, which has the oldest license in the Netherlands. It originally dates from 1635, but was rebuilt in 1913.

The Catholic church of Zundert was build in 1927, and contains art treasures from the 17th century, coming from the in . Specifically; marble altar tables, three Alabaster sculptures, several paintings and two carved oaken confessionals.

The town hall of Zundert was built in 1830 in neoclassical style and demolished and rebuilt in the same style in 1965.

Zundert is the home of an 17th century windmill, called 'De Akkermolen' (The Croftmill).It's said to have been originally built in 1652. It's a standard mill, and it was built to process grain.

The mill had numerous private owners in the past, including Stewart Willem V, as the Baron of Breda, who became owner in 1794.

The mill was heavily damaged in 1950, and it's existence was threatened several occasions after that. The Akkermolen is currently owned by the municipal of Zundert, which bought it 1959, the last private owners were the Herijgers family. After the mill was taken over by Zundert, it needed serious restoration, which took place in 1961. And again in 1991, but the last time, the entire mill needed to be taken apart and restored. The Akkermolen can be visited, after you arrange an appointment at Akkermolenweg 15.

The town had other mills in the past, one of them was a stone-mill called "De Eendracht", which stood on Moleneind, currently known as Poteind. It burned down on Januari 23, 1909. The owner at the time;Jaak Theeuwis, had already lost a wooden mill in Zundert, which was blown down in the previous year of 1908. A store called "de Boerenbond" is now located on the former mills location.

Zundert is the birthplace and childhood home of the famous painter . He was born on 30 March 1853 in a little house on Zunderts main street, "Markt 29". The former house is gone as it was too dilapidated to preserve, but a plaque at this location still commemorates his birth. In May 2007 the renovation of the house at Markt 29, and the neighbouring house, started. After the renovation, the Vincent V. Gogh house was opened in August 2008.

People can still visit the Dutch Reformed church built in 1806 in which the father of Vincent, Theodorus van Gogh, started preaching in 1849. In the graveyard is the grave of Vincent's one year older brother, who died soon in infancy - also called Vincent van Gogh. Vincent did not paint when he lived in Zundert, but drew some sketches. In letters to his Brother Theo, Vincent recalls Zundert, and its surroundings a few times when writing about childhood, serenity and learning about life. Because he died in the French Auvers-sur-Oise, on 29 July, 1890, a special relation between these two places exists. This can, for example, be noticed by the existence of a slightly hidden Auvers-sur-Oise-street, ending at the V. Gogh square.

To keep Vincent's memory alive, the municipal of Zundert started the project of realising a Vincent van Gogh house. Rather than a classical museum, it's an active environment, with a presentation about V.Gogh's life, interactive education, a documentation room and also permanent and temporary expositions. Tourist information will also be located in the building, as well as a pleasant bar with a garden terrace.

There are several activities relating to V.Gogh, you can go to Tourist information Zundert about participating in these activities, which is in the V. Gogh house, opposite the town hall.

Zundert boasts the oldest (since 1936) and hugely elaborate flower in Europe, held on first Sunday in September. Depending on the weather, at least 50.000 people attend.Huge, and often impressive lorry mounted sculptures covered in thousands of flowers parade through the town. Each of the competing districts of Zundert construct their own entry. For more information go to [http://www.bloemencorsozundert.nl www.bloemencorsozundert.nl]

There is also an annual international triathlon in Zundert, today called 'De Bode Triathlon', named after its biggest sponsor. The 2006 edition of this triathlon however couldn't go on, because problems with the quality of the swimming water.