Save the Last Dance

Save the Last Dance 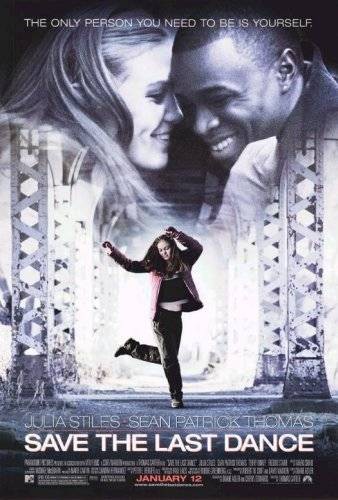 
"Save the Last Dance" is a 2001 movie produced by , directed by Thomas Carter, written by Duane Adler, and released by on , . The film stars and as a teenage interracial couple in who work together to help the main character, played by Stiles, train for a audition. A , "", was released in .

As a promising dancer in high school, Sarah Johnson () hoped to be admitted to study at and invited her mother to attend the . Sarah failed in this first attempt, then was horrified to discover that her mother had been involved in a fatal car crash in her haste to arrive at the tryout. Wracked with guilt, Sarah gives up on entirely.

After her mother's death, Sarah moves in with her estranged father (). He plays the trumpet in a local Chicago jazz band and lives in a predominantly African American neighborhood. At her new high school, Sarah is one of only a handful of white girls, but is befriended quickly by Chenille (). Chenille's brother, Derek (), is a promising student with dreams of going to Georgetown Medical School.

Chenille invites Sarah to a dance club called STEPPS, where she has her first experience dancing to rhythms. Derek dedicates himself to helping her develop her talent, as they practice in abandoned warehouses, school classrooms and anywhere they can find. As they become closer, Derek takes a reluctant Sarah to the and afterwards, Sarah confides in him all about her mother and her dreams of Juilliard. Later they return to the club and amaze others with their dancing, although Derek also sees his ex-girlfriend, Nikki, and engages in a round of "" with her, temporarily putting off Sarah. Little by little, Derek and Sarah become romantically involved. Having already achieved his dream of being accepted at Georgetown, Derek convinces her that she needs to do what she wants, and to follow her dreams, but she needs to get back into dance shape.

Back at school, Nikki picks a fight with Sarah. Chenille tells Sarah that she didn't approve of the fight but can understand the bitterness since Sarah, a white girl, is seen as stealing one of the few good black men in the school. Because of this, Sarah breaks up with Derek.

Derek also has a friend named Malakai () from whom he has become somewhat estranged. After a drive-by at the basketball court, Malachi wants payback, and needs help. Derek is torn over repaying his friend's past loyalty at the risk of his own college plans.

Scenes of Sarah's audition for Juilliard, in which Derek arrives at a crucial moment to offer encouragement, alternate with scenes of Malakai's shoot-out, in which friends are killed by a rival gang and Malakai is arrested. The film closes as Derek, Sarah, Chenille and their friends join at STEPPS to celebrate Sarah's successful audition.

"Save the Last Dance" was also successful at a number of movie awards, most notably:

*It was also nominated for the 2002 in the category "Theatrical - Best Supporting Actress" for Kerry Washington and the 2002 Golden Reel Awards in the category "Best Sound Editing - Music, Musical Feature Film" for the music editor .

Despite these awards, the movie was not well received by critics. ' rating assesses the film as "Rotten," with 47 of 92 reviewers panning the film, and summarizes the critical consensus as "This teen romance flick feels like a predictable rehashing of other movies."

The soundtrack, filled with music underscoring the dance scenes from the film, also became a success. It features a lineup of R&B and hip hop performers such as Snoop Dogg, Ice Cube, Pink and , , , , , , and . , of the hip hop group Onyx, who also appears in the film in a supporting role, performs the main theme on the soundtrack.