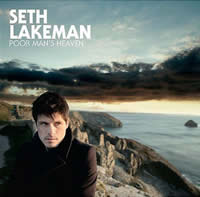 
's fourth album, Poor Man's Heaven (not to be confused with the EP of the same name released in late 2007), was released on 30 June 2008, entering the UK Album Charts at number 8. Taking over 10 months to finalise, many of the tracks to be on the album have been part of Lakeman's live set since the second half of 2006, the initial tracks performed being 'Poor Man's Heaven' and 'Race to be King', but this expanded towards the end of the tour, with new tracks continuing to be previewed throughout 2007 and into 2008.

Many songs on the album have, by Lakeman's own admission, a rockier sound than his earlier, arguably more straightforwardly acoustic folk, material

While ackowledging the shift to a rockier emphasis, Lakeman denies that the album is any less acoustic or more electric than his earlier material

Two of these tracks, 'Poor Man's Heaven' and 'Race To Be King', appear on the EP released in October 2007.

Mojo Magazine, July 2008. rating|4|5 "Seth Lakeman burns high octane non-stop. On this fourth album his voice is all muscularity and barely contained passions... Beneath a superficial folk-rock jigginess his band has a possibly Led Zeppelin related sense of how acoustic fiddle, guitar and double bass riffs can weigh heavy as metal."

Q Magazine, Andy Fyfe, July 2008. rating|3|5 "The frantic fiddle remains dominant but guitars and drums crash all around it, Feather in a Storm even adding Jimmy Page-esque slide guitar. Lakeman's unwelcome mantle of folk's poster boy is unlikely to slip."

[http://music.guardian.co.uk/folk/reviews/story/0,,2285729,00.html The Observer, Neil Spencer, 15 June 2008] . "a ripsnorter of a record that will slake the thirst of crowds roused by a season of his festival performances...Still, after four albums of much the same fayre, our West Country hero might usefully stray into fresh songwriting territory next time, and lose the roll call of cliches which demand that eyes are always burning, nights always dark and dawns crimson."

[http://entertainment.timesonline.co.uk/tol/arts_and_entertainment/music/cd_reviews/article4220013.ece The Times, 27 June 2008, John Mulvey] , rating|2|5 "it is not his appropriation of rock music that is the problem, but the kind of rock music that he favours...uncomfortably reminiscent of records by David Gray and Damien Rice: curiously at once both overwrought and bland. "

[http://music.guardian.co.uk/reviews/story/0,,2287486,00.html The Guardian, 27 June 2008, Alexis Petridis] rating|3|5 "the album is at its best when it's at its most raw, when it stops worrying too much about charming those in charge of radio playlists and lets Lakeman's natural instinct for eeriness shine through."

As with much of his music, the theme of songs dealing with darker topics and real-life incidents continues on this album. Lakeman describes I'll Haunt You (written with ) as being 'probably the darkest material either of us [sic] have ever written'. There is also a strong, though not exclusive, theme of songs about seafaring and the coast, again continuing a trend from much of his earlier material. 'Solomon Browne' for example, another key track, is about the in 1981 in which 16 people lost their lives.

In an interview for fRoots magazine in March 2008, Lakeman gave more information on some of the tracks:

Feather in a Storm: the story of Danish pirate John Coppinger who, legend has it, planted false beacons on coastal rocks to lure ships to disaster while his gang lay in wait to salvage the booty.

The Hurlers: based on a Bodmin legend about a local priest turning local men into stone, having caught them playing hurling when they should have been in church.

Not all the tracks are so dark. Of Crimson Dawn Lakeman is quoted as saying, "It's about a guy who goes out on a lifeboat and among the ones he saves is a beautiful woman, but her hair gets tangled up in the lifeboat rigging. He chops her hair off with an axe and they end up getting married and live happily ever after. That's a nice story, isn't it?".