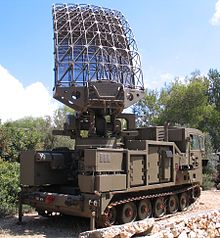 A counter-battery radar detects artillery projectiles fired by one or more guns, howitzers, mortars and rocket launchers and from their trajectories locates the position on the ground of the gun, etc., that fired it. Alternatively, or in addition, it may determine where the projectile will land. The normal purpose of a counter-battery radar is to locate hostile batteries up to about 50 km away depending on the radar's capabilities.

If the radar is fast and has fast communications, then it may be possible to provide some warning to troops targeted by the incoming projectiles. However, many projectiles have a time of flight under a minute, which makes it difficult to give warnings without a highly automated communication system, unless the target is in the vicinity of the radar. Counter-battery radars can also be used to observe the fire of friendly artillery and calculate corrections to adjust its fire onto a particular place.

Radar is the most recently developed means of locating hostile artillery. The emergence of indirect fire in World War I saw the development of sound ranging, flash spotting and air reconnaissance, both visual and photographic. Radars, like sound ranging and flash spotting, require hostile guns, etc., to fire before they can be located.

The first radars were developed for anti-aircraft purposes just before World War II. These were soon followed by fire control radars for ships and coastal artillery batteries. The latter observed the fall of shot enabling corrections to be plotted. It was also found that some radars could detect large projectiles in flight.

However, radar operators in light anti-aircraft batteries close to the front line found they were able to track mortar bombs. Probably helped by the fins of a mortar bomb producing a stronger return signal. This led to their dedicated use in this role, with special secondary instruments if necessary, and development of radars designed for mortar locating.

Locating mortars was relatively easy because their trajectory was sufficiently close to parabolic that the simple mathematics of parabolas could be used with analogue computers. Better radars were also able to detect howitzers when firing in high angle (elevation greater than 45 degrees), although in reality such use was quite rare.

Low angle trajectories normally used by guns, howitzers and rockets were more difficult. They could be detected but their shape, a segment of an ellipse, was impossible to resolve until efficient algorithms were developed and digital computers, usable on the battlefield, had achieved the necessary performance.

By the early 1970s radar systems capable of locating guns appeared possible, and many European members of NATO embarked on the joint Project Zenda. This was short-lived for unclear reasons, but the US embarked on Firefinder program and Hughes developed the necessary algorithms, although it took two or three years of difficult work.

The next step forward was European when in 1986 France, Germany and UK agreed the 'List of Military Requirements' for a new counter-battery radar. The distinguishing feature was that instead of just locating individual guns, etc., the radar was able to locate many simultaneously and group them into batteries with a centre point, dimensions and attitude of the long axis of the battery. This radar eventually reached service as EuroART's COBRA system.

However, operations in Iraq and Afghanistan led to a new need for a small counter-mortar radar, given 360 degree coverage and requiring a minimal crew, for use in forward operating bases. In another back to the future step it has also proved possible to add counter-battery software to battlefield airspace surveillance radars.

The basic technique is to track a projectile for sufficient time to record a segment of the trajectory. This is usually done automatically, but some early and not so early radars required the operator to manually track the projectile. Once a trajectory segment is captured it can then be processed to determine its point of origin on the ground. Before digital terrain databases this involved interaction with a paper map to check the altitude at the coordinates, change the location altitude and recompute the coordinates until a satisfactory location was found.

The additional problem was finding the projectile in flight in the first place. The conical shaped beam of a traditional radar had to be pointing in the right direction, and to have sufficient power and accuracy the beam couldn't have too large an angle, typically about 25 degrees, which made finding projectile quite difficult. One technique was to deploy listening posts that told the radar operator roughly where to point the beam, in some cases the radar didn't switch on until this point to make it less vulnerable to electronic counter-measures (ECM). However, conventional radar beams were not notably effective.

Since a parabola is defined by just two points then tracking a segment of the trajectory was not notably efficient. The Royal Radar Establishment in UK developed a different approach. The Foster scanner converted the conical beam into one about 40 degrees wide and 1 degree vertical with an antenna that had only two predefined vertical positions. A mortar bomb was plotted as it passed through each of the beam positions to provide the necessary two points that could be processed by an analogue computer.

However, once phased array radars compact enough for field use and with reasonable digital computing power appeared they offered a better solution. A phased array radar has many transmitter/receiver modules. These are electronically controlled and cover a 90 degree arc without moving the antenna. They can detect and track anything in their field of view, providing they have sufficient computing power. They can filter out the targets of no interest (e.g.: aircraft) and depending on their capability track a useful proportion of the rest.

Counter battery radars are mostly X band because this offers the greatest accuracy for the small radar targets. However, C and Ku bands have also been used. Projectile detection ranges are governed by the radar cross section (RCS) of the projectiles. Typical RCS are:

The best modern radars can detect shells at around 30 km and the others at 50+ km. Of course the trajectory has to be high enough to be seen by the radar at these ranges, and since the best locating results for guns and rockets are achieved with a reasonable length of trajectory segment close to the gun, long range detection does not guarantee good locating results. The accuracy of location is typically given by a circular error probable (CEP) (the circle around the target in which 50% of locations will fall) expressed as a percentage of range. Modern radars typically give CEPs around 0.3 - 0.4% of range. However, with these figures long range accuracy may be insufficient to satisfy the Rules of Engagement for counter-battery fire in counter insurgency operations.

Radars typically have a crew of 4 – 8 soldiers, although only one is needed to actually operate the radar. Older types were mostly trailer mounted with a separate generator, so took several minutes to bring into action and need a larger crew. However, self-propelled ones have been used since the 1960s. To produce accurate locations radars have to know their own precise coordinates and be precisely oriented. Until about 1980 this relied on conventional artillery survey, although gyroscopic orientation from the mid 1960s helped. Modern radars have an integral Position and Azimuth Determining System and GPS.

Radars can detect projectiles at considerable distances, and larger projectiles give stronger reflected signals. Detection ranges depend on capturing at least several seconds of a trajectory and can be limited by the radar horizon and the height of the trajectory. For non-parabolic trajectories it is also important to capture a trajectory as close as possible to its source in order to obtain the necessary accuracy.

Action on locating hostile artillery depends on policy and circumstances. It some armies radars may have authority to send target details to counter-battery fire units and order them to fire, in others they may merely report data to an HQ that then takes action. Modern radars usually record the target as well as the firing position of hostile artillery. However, this is usually for intelligence purposes because there is seldom time to alert the target with sufficient warning time in a battlefield environment, even with data communications. However, there are exceptions. The new Lightweight Counter Mortar Radar (LCMR – AN/TPQ 48) is crewed by two soldiers and designed to be deployed inside forward positions, in these circumstances it can immediately alert adjacent troops as well as pass target data to mortars close by for counter-fire.

Radars are vulnerable and high value targets; they are easy to detect and locate if the enemy has the necessary ELINT/ESM capability. The consequences of this detection are likely to be attack by artillery fire or aircraft (including anti-radiation missiles) or ECM. The usual measures against detection are using a radar horizon to screen from ground based detection, minimising transmission time and using alerting arrangements to tell the radar when hostile artillery is active. Deploying radars singly and moving frequently reduces exposure to attack.

However, in low threat environments, such as the Balkans in the 1990s, they may transit continuously and deploy in clusters to provide all-around surveillance.

In other circumstances, particularly counter-insurgency, where ground attack with direct fire or short range indirect fire is the main threat radars deploy in defended localities but do not need to move, unless they need to cover a different area.