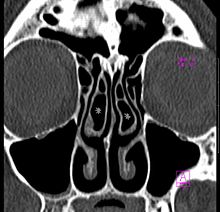 A concha bullosa is a pneumatized (air-filled) cavity within a turbinate in the nose. (Concha is another term for turbinate.) Bullosa refers to the air-filled cavity within the turbinate. It is a normal anatomic variant seen in up to half the population. Occasionally, a large concha bullosa within a turbinate may cause it to bulge sufficiently to obstruct the opening of an adjacent sinus, possibly leading to recurrent sinusitis. In such a case the turbinate can be reduced in size by endoscopic nasal surgery. The presence of a concha bullosa is often associated with deviation of the nasal septum toward the opposite side of the nasal cavity. People who have concha bullosa are not more prone to have sinus disease.