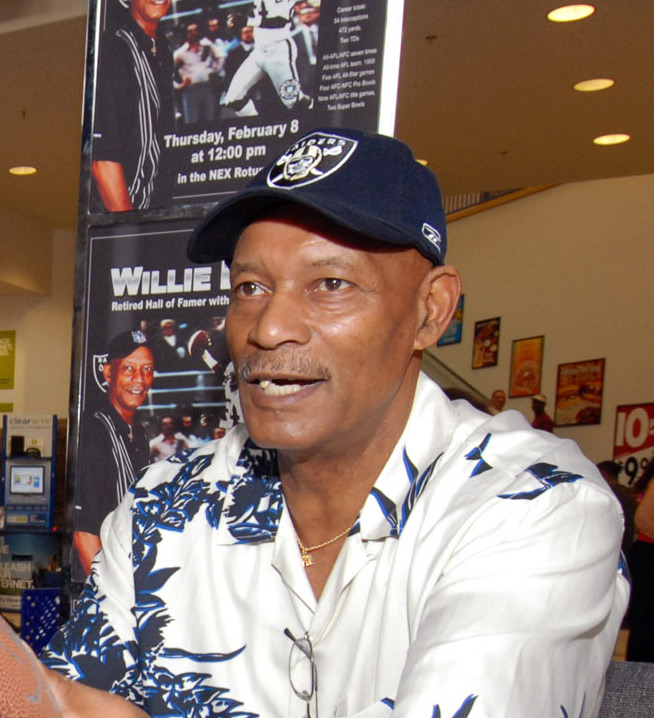 William Ferdie Brown (Born , , in ) is a retired and is currently on the staff of the .

Willie Brown played collegiate football at Grambling University and was not drafted by any professional team after leaving school in 1963. He was signed by the of the but was cut from the team during training camp.

He was then signed by the AFL's and became a starter by the middle of his rookie season. He won All-AFL honors in his second season and played in the AFL All-Star Game, recording 9 interceptions for 144 yards.

In 1967, Brown was traded to the AFL's and would spend the remainder of his career there. He served as defensive captain for 10 of his 12 years with the team. He was named to 5 AFL All-Star games and 4 NFL Pro Bowls. He was also named All-AFL 3 times and All-NFL 4 times.

Perhaps Brown's most memorable moment as a Raider came during , when he intercepted a pass and returned it a Super Bowl-record 75 yards for a . His record would stand for 29 years until it was broken by 's 76-yard interception return in .

Willie Brown retired after the 1978 season, and finished his Raiders career with 39 interceptions, tied for first all-time on the team. Overall, he finished his 16 Pro Football seasons with 54 interceptions, which he returned for 472 yards and 2 touchdowns. He also recovered 3 fumbles.

He is a member of the and was inducted into the on , , his first year of eligibility. In 1999, he was ranked number 50 on ""' list of the 100 Greatest Football Players, making him the highest-ranking Raider player.

Brown served as a defensive backfield coach for the Raiders from 1979-88. He also had stints as the head at in 1991, where he earned a Master's degree and L.A. Jordan High School in 1994. In 1995 he returned to the Raiders as the Director of Staff Development.