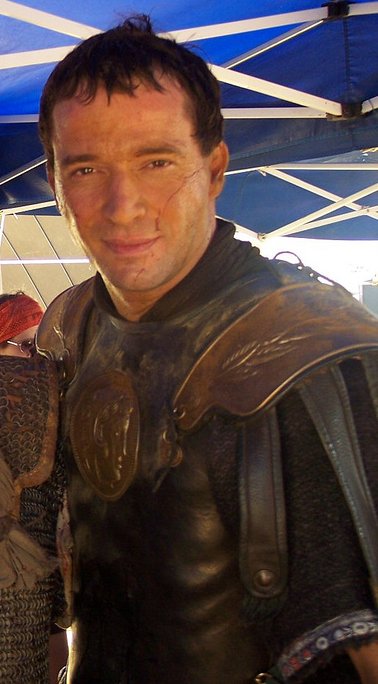 Purefoy was born in , . He was a boarder at which he left with only one . Later he went to night school and got 11 more, then took his A-levels.

Purefoy's early professional roles included Romeo in "" in , Walter in "Mary Morgan" at the and Alan Strang in "Equus" on tour.

The RSC and other stage work

His appearances in films and television have predominated. He played James McCarthy, a young man accused of murdering his father, in "The Boscombe Valley Mystery," in Granada's "The Memoirs of Sherlock Holmes". One of his notable roles was as Nicholas Jenkins in the eight-part miniseries "" for in 1997. He played in the film "".

He plays Mark Antony in the HBO/ original , "Rome". His full frontal nudity in episode four of the series caused a sensation among the show's viewers. When his Wikipedia entry was brought up in an interview with Alastair McKay, published in the January 2007 issue of "Out" magazine, Purefoy said, "I won't say whose it was, but there was a penis in the series that may have been slightly enhanced. But it wasn't mine. Mine's all mine, I'm afraid." [McKay, Alastair. [http://www.out.com/detail.asp?id=21656 "All Hail James Purefoy"] . Out.com. ]

Purefoy was attached to star in the 2005 film "V for Vendetta", but was replaced by . (Both Purefoy and Weaving starred in the 1998 gay British comedy, "".) It was later revealed that Hugo Weaving had been originally first choice for the film, but was involved in the Australian film "Eucalyptus". Later, production of "Eucalyptus" had been halted, freeing up Weaving, and Purefoy had willingly left "V for Vendetta" because the mask made him extremely uncomfortable. [Grossman, Lev. [http://www.time.com/time/europe/eu/article/0,13716,1172195,00.html "The Mad Man In The Mask"] . "Time", 12 March 2006.]

Purefoy was ed for the role of in 1995 for "", [imdb name|id=0700856|name=James Purefoy] but ultimately lost the role to . Throughout 2004 and 2005 Purefoy's name was rumoured as a possible candidate to replace Brosnan as agent 007 in future James Bond films. Rumors and speculation suggested that Purefoy's departing of "V for Vendetta" was due to an opportunity to play James Bond in the 2006 film "Casino Royale". [Morris, Clint. [http://www.moviehole.net/news/5762.html "McMahon still in the running for 007"] . MovieHole.com. 10 June 2005.] However, this news was confirmed to be false when was announced as the new James Bond. In the commentary track of the "" special edition , director stated his opinion that Purefoy would be the perfect choice to play the "next" , well before Purefoy was being considered for the "Casino Royale" role.

In March 2007, Celtic Films indicated on their website that they have a series of Flashman TV films in development, based on the popular fictional series of novels of the same name by George Macdonald Fraser. Picture Palace Productions announced they were developing Flashman at the Charge, (the fourth novel in the series of twelve), for TV [1] in conjunction with Celtic Films and that the script was prepared by George Macdonald Fraser himself. Both companies took an extensive role in developing Bernard Cornwell's Sharpe (TV series). Purefoy was rumoured to have provisionally accepted an offer made to play the titular role of Harry Flashman.

Producer announced that James Purefoy would play in a new TV series of "The Saint". The new series was scheduled to start shooting in Berlin and Australia in April 2008. [ [http://www.saint.org/blog/2007/12/james-purefoy-to-play-simon-templar-in.html "James Purefoy to play Simon Templar in The Saint"] , "The Saint Club". 5 December 2007.] However, production ultimately did not occur and in August Purefoy was reported as negotiating with to star in another series. ["": " [http://www.hollywoodreporter.com/hr/content_display/television/news/e3i1da5db18eb0203bb6af7cdc7aa6f647c James Purefoy circles NBC series] , July 21, 2008. Accessed August 5, 2008.]