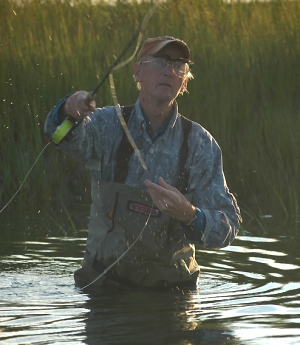 Jack Gartside (born in ) is an acclaimed American fly tyer and author.

Considered one of the most talented and innovative fly tyers of the modern era, Gartside was taught how to tie flies at the age of 10 by , the outfielder. Among his best-known original patterns are the Sparrow, the Soft Hackle Streamer, the Pheasant Hopper, the Gartside Leech, the FishHead, and the Gurgler. His designs have been featured in 's "Book of Fly Patterns," 's "The Art of the Fly," 's "Salt Water Fly Patterns," 's "Salt Water Flies," and 's "Flyfishing for ." He was one of the first fly tyers to be profiled in (October 12, ).

He currently resides in .

Gartside is a proponent of natural materials and the style of tying. A common theme in his patterns is blood wound as hackle, as seen in his Soft Hackle Streamer and Soft Hackle Deceiver patterns. Although limited in his use of synthetic materials, he is credited with popularizing the use of (as seen in his FishHead and Floating Minnow patterns), and (as used in his Gurgler pattern).