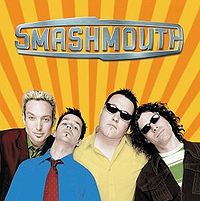 "Smash Mouth" is the self titled third album by alternative rockers released in late 2001. It was notable in that it was their first album with new drummer and its release was delayed a few months due to the death of lead vocalist 's son, Presley Scott Harwell.

The rock band held a contest on their website in the fall of 2000 to name their third . The result was a two-way tie with the winning suggestion being to self-title the album. It was released in the summer of 2001 along with the single "Pacific Coast Party".

At the end of "Disenchanted", you can hear the sound of something crashing to the ground. was recording his vocals in a large room normally used for orchestras on movie soundtracks at . When he was finished with a take, he accidentally knocked over a vintage tube microphone. He tries to convince producers and engineers that everything is fine and it could be fixed with duct tape, but the microphone was not harmed.