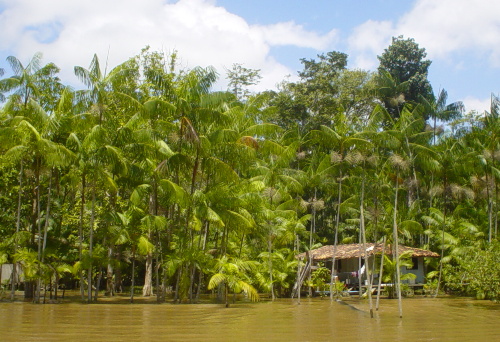 The açaí palm (IPA-en|asaˈi) is a member of the genus "Euterpe", which contains 7 species of palms native to tropical Central and , from south to and , growing mainly in floodplains and swamps.

The genus is named after the of . " Euterpe" are tall, slender palms growing to 15-30 meters, with leaves up to 3 meters long. Many of the palms that were once in the genus "Euterpe" have been reclassified into the genus "Prestoea" (Riffle, 2003). The species "Euterpe oleracea" is usually called Açaí Palm, after the Portuguese derivation of the Tupian word "ïwasa'i", 'fruit that cries or expels water'.

The , a small, round, black-purple about 1 inch (25 mm) in diameter, similar in appearance and size to a but with less pulp, is produced in branched s of 700 to 900 fruits. Two crops of fruit are produced each year. The fruit has a single large about 0.25-0.40 inch (7–10 mm) in diameter. The of the ripe fruits is a deep purple color, or green, depending on the kind of açaí and its maturity. The is pulpy and thin, with a consistent thickness of 1 mm or less. It surrounds the voluminous and hard which contains a with a diminutive and abundant .Fact|date=February 2007 The seed makes up about 80% of the fruit (Schauss, 2006c).

The berries are harvested as food. In a study of three traditional populations in the Amazon region of Brazil, açaí palm was described as the most important plant species because the fruit makes up such a major component of diet (up to 42% of the total food intake by weight) and is economically valuable in the region (Murrieta et al., 1999).

The juice and pulp of açaí fruits ("Euterpe oleracea") are frequently used in various juice blends, s, sodas, and other beverages. In northern Brazil, açaí (or jussara, which is one of the fruit's common folk names) is traditionally served in s called "cuias" with and, depending on the local preference, can be consumed either salty or sweet (, and are known to be used in the mix). Açaí has become popular in southern Brazil where it is consumed cold as ("açaí in the bowl"), mostly mixed with — a fad in which açai is considered an energizer. Açaí is also widely consumed in Brazil as an flavor or juice.

As the high fat content of açaí (Nutritional content, below) indicates it would deteriorate rapidly after harvest, its raw material is generally available outside the immediate growing region only as juice or fruit pulp that has been frozen or processed as a pulp powder or powder. Several companies now manufacture juices, health drinks, s, and s made from açaí berries, often in combination with other fruits.

Apart from the use of its berries as food, the açai palm has other commercial uses. Leaves may be made into hats, mats, baskets, brooms and roof thatch for homes, and trunk wood, resistant to pests, for building construction (Silva, 2005).

Comprising 80% of the berry mass, seeds may be ground for livestock food or as a component of organic soil for plants. Planted seeds are used for new palm tree stock which, under the right growing conditions, requires months to form seedlings.Fact|date=August 2008

Most of the research to date on açaí has focused on a particular freeze-dried form referred to as Opti-açaí. This powder preparation of freeze-dried açaí fruit pulp and skin was reported to contain (per 100 g of extract) 533.9 , 52.2 g , 8.1 g , and 32.5 g total . The carbohydrate portion included 44.2 g of .

A powdered preparation of freeze-dried açaí fruit pulp and skin was shown to contain (3.19 mg/g), including 3-glucoside and cyanidin 3-rutinoside,

Freeze-dried açaí powder was found to have high antioxidant activity against (1614 units/g) and s (1027 μmol TE/g) and milder activity for and s.

Freeze-dried açaí powder was shown to have mild inhibitory effects on enzymes COX-1 and COX-2,

* [http://www.rbgkew.org.uk/wcsp/home.do Kew Checklist] (enter 'Euterpe' in search box)
* [http://nature.org/success/art15110.html Pictures of açaí palms trees and fruit] from an article by .