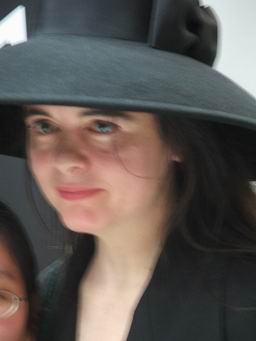 Amélie Nothomb (born , ) is a Belgian who writes in French.

She was born in , to Belgian diplomats. She lived there until she was five years old, and then subsequently lived in , , , , a stint in Coventry and .

She is from a distinguished political family; she is notably the grand-niece of , a Belgian foreign minister (1980-1981). Her first , "Hygiène de l'assassin," was published in 1992. Since then, she has published approximately one novel per year with a.o. "Les Catilinaires" (1995), "Fear and Trembling" (1999) and "Métaphysique des tubes" (published in English as "The Character of Rain") (2000).

She has been awarded numerous prizes, including the 1999 ; the ; and twice the .

While in Japan, she attended a local school and learned Japanese. When she was five the family moved to . "« Quitter le Japon fut pour moi un arrachement »" (“Leaving Japan was a wrenching separation for me”) she writes in "Fear and Trembling". Nothomb moved often, and did not live in until she was 17, when she moved to . There, she reportedly felt as much a stranger as everywhere else. She studied at the . After some family tensions, she returned to Japan to work in a big Japanese company in . Her experience of this time is told in "Fear and Trembling". She has written a romanticized ("The Book of Proper Names") for the French female singer in 2002 and during the period 2000-2002 she wrote the lyrics for nine tracks of the same artist. Many ideas inserted in her books come from the conversations she had with an Italian man, from late eighties and during the nineties. She used the French , while he used the Italian Videotel system, connected with the French one. They never met personally.

Unless otherwise stated, all works were originally published in French by .