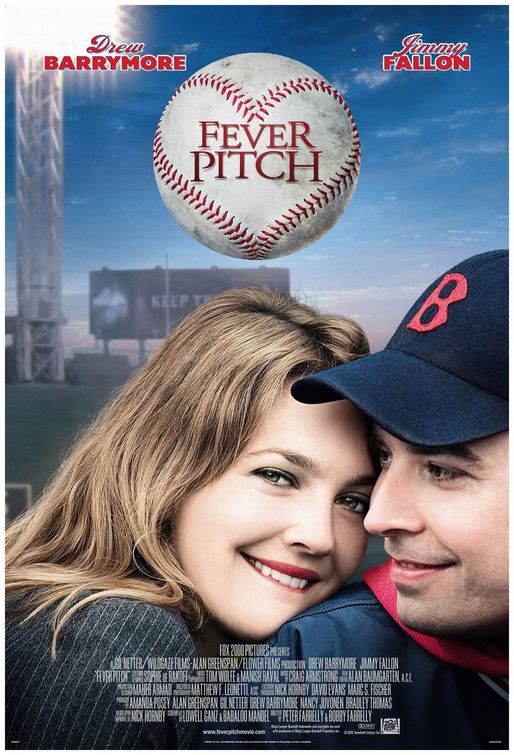 "Fever Pitch", which was released as "The Perfect Catch" outside of the and , is a . It is a of a 1997 British film of the same name. Both films are loosely based on the book of the same name, a best-selling memoir in the UK. While both the book and the original 1997 film are about , this version, aimed at the US market, is about . The film opened in theaters on , 2005.

The movie begins with Ben Wrightman as a 7 year old going to a Red Sox game with his Uncle Carl. His uncle treated him like a son because he had no kids of his own. The opening narrative explains that ever since that day, Ben became a die-hard Red Sox fan. Just about everything he owns bears the Red Sox name, emblem or the image of a Red Sox player (with the exception of his toilet paper, which bears the insignia). Ben inherited his uncle's season tickets when he died.

The story picks up 23 years later with Ben () as a school teacher who is still rather immature for his age. He meets Lindsey Meeks (), a professionally successful workaholic executive. Overcoming her initial hesitance, she becomes attracted to him because of his ability to show a passionate commitment to something. That spring, he later pretends he is proposing to her, but instead asks her to the Red Sox home opener. Lindsey attends, but not being a baseball or Red Sox fan, she knows nothing about the or even how to pronounce the name Yastrzemski. The two continue to attend the games together until one summer night when Lindsey attempts to catch up on work by taking her laptop to the game. Not paying attention to the game, she is knocked out by a line drive foul ball by then off . She eventually recovers, but stops going to the games.

Things take a turn for the worse when Lindsey invites Ben to go with her to Paris and he rejects the offer because the Red Sox are in the heat of the playoff race. Before leaving for Paris, she tells Ben she is "late" and may be pregnant with his child. Lindsey starts to become fed up with Ben's obsession with the Red Sox. Ben agrees to miss a game against the Yankees in order to go with Lindsey to her friend's birthday party. Ben and Lindsey have a wonderful time together, and as it seems the evening is nearing an end, he tells her it was one of the best nights of his life. Moments later, Ben receives a call from his ecstatic friend Troy who informs him that the Red Sox overcame a seven run deficit in the bottom of the ninth inning to pull off one of the greatest comebacks in team history. Ben becomes irate that he missed such an historic Red Sox moment, greatly hurting Lindsey's feelings. After Lindsey miserably declares he has broken her heart, he and Lindsey separate for awhile.

Ben soon misses Lindsey, and visits her in a futile attempt to reconcile. He eventually feels her loss so deeply that he plans to sell his season tickets in order to prove that she means more to him than the Red Sox. Lindsey finds out about his plan during the celebration for her much-anticipated promotion. Immediately leaving the celebration, she rushes to the ballpark to try and stop him. She gets in during the 8th inning of the Red Sox - Yankees playoff game when the Sox are just 3 outs away from being swept. Ben is actually in the process of signing a contract with the prospective ticket-buyer as they sit in the stands. Because she is unable to reach Ben from her section in Fenway park in time to stop him from signing the contract, she illegally runs across the field, deftly avoiding security personnel as she eventually reaches him. She explains that if he loves her enough to sell his seats, then she loves him enough not to allow him to do so. The two reunite and kiss in front of the entire crowd before she is thrown out.

The movie ends with a narrative explaining how the Red Sox won that game, then beat the Yankees three more times for the pennant, later sweeping the Cardinals in St. Louis for their first World Series title in 86 years. The original plot had assumed the Sox would fall as usual in the playoffs. When they kept winning in 2004, the ending had to be rewritten and additional scenes shot in St. Louis.

The movie has a 63% "fresh" rating at and a rating of 56 from . Sportswriter (and passionate Red Sox fan) has been particularly critical of the film, even dedicating one of his columns to criticizing it. [cite web | first = Bill | last = Simmons | authorlink= Bill Simmons | title = Down with a bad 'Fever' | publisher = ESPN Page 2 | url = http://sports.espn.go.com/espn/page2/story?page=simmons/050420 | accessdate = 2008-03-09] Among his complaints: the movie paints a stereotypical and untrue picture of pessimistic Red Sox fans (he claims that few fans believe in the , and that having characters talk about it ruins the film's credibility) and that filming on the field during the post-World Series celebration shows a lack of respect by the directors.