Who I Am (Amy Pearson album)

Who I Am (Amy Pearson album)

Infobox Album
Name = Who I Am
Type = studio
Artist = 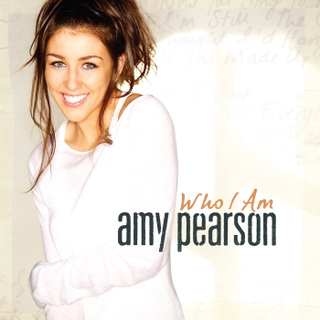 "Who I Am" is the first by singer released by in on , (see ). Although the album was planned for release in November 2007, it had been pushed back [http://www.bigwentertainment.com.au/product/who_i_am_1552519_609892.html Aus release] due to the releases of Delta Goodrem's and Kylie Minogue's albums during the same time. However the album was released in China around the original release date. It has so far released 3 singles in Australia without the help of the album release, "Don't Miss You", "Not Me" and "Ready To Fly". All three have received moderate airtime on Australian mainstream radio stations.

Pearson has sung on channel 7's hit brekky show Sunrise. She also performed Ready To Fly at It Takes Two finale earlier this year. She has also attended interviews in children shows such as channel 10's , later performing a shortened acoustic version of Ready To Fly with host , and channel 7's . With the release of her album she performed at Westfield Parramatta singing songs and signing copies of Who I Am [ [http://www.amypearson.com.au/newsEvents/home.do?newsId=20030829005485 Amy Pearson :: News ] ] The song "Now and For Always" featured in the Korean reality show "We Got Married" on the 6th of July 2008.

The Lead single was which was released on 2nd of June . With that peaking at #19 and certifying Gold she released the second single on the 20th of October 2007. It peaked at #37. The third single was Ready to Fly, which has peaked at #40. It has been rumoured on Pearon's official forum that the fourth, and last single will be "Does Anybody".

Who I Am debut on the Albums chart at #39 on [ [http://ariacharts.com.au/pages/charts_display_album.asp?chart=1G50 Australian Record Industry Association ] ]

This is "Who I Am's" brief chart performence week-by-week