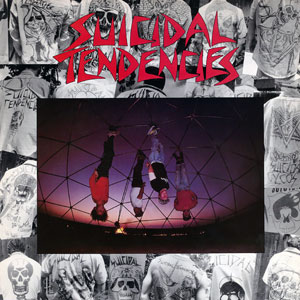 "Suicidal Tendencies" is the eponymous debut album by the band , released in 1983 on . It became one of the best-selling albums at the time and launched the band into its future success.

Included on the album is "Institutionalized", possibly the band's most popular song after two decades. In the song, the narrator describes how, despite his claims to the contrary, his overbearing parents suspect he is using drugs and verging on a . The song ends with them finally deciding to send him to a .

Critic Ira Robbins writes that "Half-sung, half-recited and built on repeated sudden tempo changes, 'Institutionalized' is a unique, devastating centerpiece. One of the era's quintessential expressions of teen dislocation, it converts misunderstandings into a complete communications breakdown, encapsulating all the punk of such films as "" and "Suburbia" in four minutes." [http://www.trouserpress.com/entry.php?a=suicidal_tendencies]

The for "Institutionalized" was one of the first hardcore punk videos to receive substantial airplay on , and the single was also used in the cult classic movie "" and an episode for the hit TV show "" (which included a cameo appearance by the group). vocalist makes a guest appearance in the video.Fact|date=July 2008

"Institutionalized" is referenced in the Sage Francis song "Slow Down Gandhi" in the line "It's death penalty vs. suicidal tendencies / All I wanted was a fucking Pepsi / Institution / Making you think you're crazy is a billion dollar industry." Limp Bizkit also referenced it in the song "Stuck" with the lines "All I wanted was a Pepsi, just one Pepsi. So far from suicidal but still I get them tendencies bringing back the memories that I really miss."Fact|date=July 2008

"Institutionalized" is featured in the game for the and as a playable song; a member of the most difficult tier, "Face Melters." It was also featured in the 2008 motion picture film "".

"I Shot The Devil" was originally titled "I Shot Reagan". Some rumors suggest the band was persuaded by the to change the name of the song.Fact|date=July 2008

The song "I Saw Your Mommy..." is featured on the soundtrack for the game for the , , and PC.

In 1993, Muir and the later incarnation of the band re-recorded the entire album and released it as "", with (mostly) faithful recreations of the originals, plus 3 songs from the also then-unavailable "".Fact|date=July 2008

The song "Two Sided Politics" was covered by on their "" album. Fact|date=July 2008

All songs composed by except as indicated.

"Suicidal Tendencies" was reissued several times, with formats in different countries (see the table below).