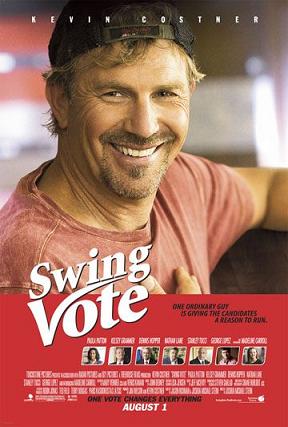 "Swing Vote" is a 2008 film about an entire U.S. presidential election determined by the vote of one man. It was directed by Joshua Michael Stern and starred , , , , , , and introducing . The film was released on August 1, 2008.

"Swing Vote" deals with the story of an election set somewhere in the near future where Bud Johnson (), a lovable loser who is coasting through life and hasn't a single political thought in his head, is thrust into an improbable dilemma. In response, he is coaxed by his 12-year-old daughter Molly () to take more of a serious approach to life. Molly runs the household and sees an opportunity on election day to energize her father. The election is a "dead heat" with the sole deciding ballot in the hands of a mystified Bud, who is being wooed by candidates from both sides, the incumbent Republican Andrew Carington Boone () and the opposing Democrat (whose political office is never given), Donald Greenleaf (). Neither of the candidates Vice Presidential selections are mentioned.

Bud's actual opinions (or lack thereof) are misinterpreted by the media, causing the candidates to flip-flop on several positions (The Democrats take a and anti- stand, while the Republicans take a pro-environmental and pro stand). In the end, Bud chooses to hold a final debate the day before he is set to recast his ballot. In a written speech, he confesses that he knows little to nothing about politics, or for that matter, life, and decides to ask questions from people in the mail. The movie ends with Bud casting his vote, though it is never revealed who he voted for.

Filming of "Swing Vote" primarily took place in Albuquerque and . Although not intended as a political statement on the upcoming presidential elections, when Kevin Costner found he couldn’t get the financing he wanted for "Swing Vote", "to get it into theaters in time for the 2008 presidential election, he bankrolled it himself." [DeYoung, Bill. [http://www.tcpalm.com/news/2008/aug/01/swing-vote-costner-throws-his-hat-ring/ "'Swing Vote': Costner throws his hat into the ring".] Scripps Interactive Newspaper Group, August 1, 2008. Retrieved: August 1, 2008.]

Joshua Michael Stern, who directed and co-wrote the script with Jason Richman, had earlier precedents to follow. The premise of the film is similar to an story Franchise, in which elections have evolved until the entire decision is based on one man chosen by . The premise of ’s 1939 movie "" is also very similar to "Swing Vote". [ [http://movies.nytimes.com/2008/08/01/movies/01swin.html "Hey America This Guy's For You".] "", August 1, 2008. Retrieved: August 1, 2008.]

Reception by reviewers has been mixed to negative and the film holds a 39% negative approval rating on the review website based on 102 reviews, and a 47% mixed to average approval rating on The film had a weak opening of less than $7 million and as of August 2008, recouped only a total gross of $13 million, $7 million less than the film cost to make.

After release, a controversy arose when one of the main stars complained about his role being cut; Dennis Hopper in a series of interviews, claimed, "I got cut out of that movie". [Rush, George and Joanna Molloy (Rush & Malloy). [http://www.nydailynews.com/gossip/rush_molloy/ "Hopper: 'Vote' ain't got that 'Swing'".] "New York Daily News", August 7, 2008. Retrieved: August 9, 2008.]

Bradley Blakeman, a former deputy assistant for appointments and scheduling to President , filed a lawsuit on August 7, 2008, stating that he gave Kelsey Grammer a copyrighted screenplay entitled "Go November" in 2006. The lawsuit, filed at the in , is against Grammer, Kevin Costner (co-financier), (owner of the film rights), Walt Disney Motion Pictures Group Inc. (production company) and (distributor), and claims that the plot and marketing elements of "Swing Vote" were stolen from him. [Gross, Samantha. "Ex-Bush aide claims 'Swing Vote' stolen from him." "", August 8, 2008. Retrieved: August 9, 2008.]