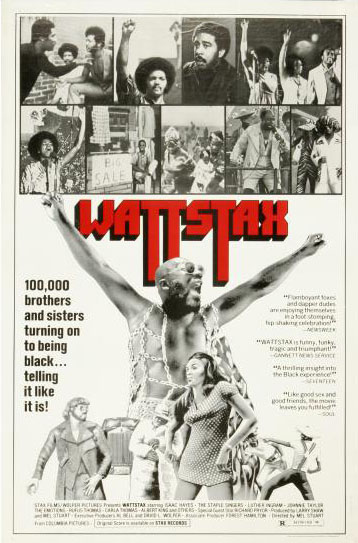 "Wattstax" is a 1973 documentary film by that focused on the 1972 Wattstax music festival and the community of Watts in . The film was nominated for a for Best Documentary Film in 1974.

100,000 brothers and sisters turning on to being black...telling it like it is!

The concert was held at the on , and organized by Memphis's to commemorate the seventh anniversary of the . Wattstax was seen by some as "the Afro-American answer to Woodstock". In order to enable as many members of the black community in L.A. as possible, tickets were sold for only $1.00 each. The Reverend gave the invocation, which included his "" poem, which was recited in a with the assembled stadium crowd. Interspersed between songs are interviews with , and others who discuss the black experience in America.

The film begins with an introduction by Pryor. This is followed by shots of urban life on the streets of Watts, accompanied by the song "What You See Is What You Get" by . Mel Stuart wasn't terribly happy about the full concert footage and had the Pryor interludes between certain songs and live shots of urban life in the city. Stuart felt he wanted someone to narrate between the scenes to create a transition in a comedic but meaningful way. Scenes of the concert being set up while the song "Oh La De Da" by the play followed by showing the crowds entering the stadium with another Dramatics song playing, "We the People".

The first song played in concert is the "" performed by while the audience sits. An introduction by Jesse Jackson who encourages the audience with their right fist in the air while he performs his poem "". Kim Weston follows this up with a performance of the "Black National Anthem"; "". While she sings the audience is more invigorated to stand and still have their fists in the air while the song is intercut with images from African-American history. Following this scene is a performance of "Somebody Bigger Than You and I" by Jimmy Jones.

A brief discussion about is followed by a performance of "Lying on the Truth" by Gospel band . This is inter-cut with shots of various churches around Watts. The song "Peace Be Still" is heard, and eventually seen performed by in a local church. This is followed by another brief discussion of Gospel music with a performance of "Old-Time Religion" performed by "" which included , Louise McCord, Debra Manning, Eric Mercury, Freddy Robinson, Lee Sain, Ernie Hines, Little Sonny, Eddie Floyd, the Newcomers, the Temprees, and Frederick Knight. After a brief interlude with Richard Pryor, introduces the Staple Singers who play "Respect Yourself" in concert.

The follow another montage commentary on African-American identity. The Bar-Kays saxophonist speaks saying, "freedom is a road seldom traveled by the multitude" (later made famous when they were sampled by Public Enemy in "Show 'Em Whatcha Got"). The Bar-Kays then play "Son of Shaft." This is followed by a montage of conversations about unemployment and crime in Watts. Following this is a brief performance of playing "I'll Play The Blues for You" which is quickly cut to another conversation with the people of Watts about , depression. An unusual piece of footage is shown of performance of "Walking the Backstreet and Crying" by . This is shown in a similar style as a , with Milton lip-synching the song near a train station with a burning trash can next to it.

That segment is followed by talking about a character named "Jody" as being someone who "is that fella, when you leave home at six o'clock, he's in that house at six-one". This is followed by shots of various rich African Americans exiting their expensive cars and stereotypical pimp clothing, while the song "Jody's Got Your Girl and Gone" by is being performed in a night club. This is followed by a sketch with Richard Pryor discussing . A montage of couples in Watts is shown while a discussion about dating and romance is heard, with "I May Not Be What You Want" performed by in the background. The scene then changes to a performance of "Picking Up the Pieces" by . During this song, several red, black and white balloons are released in the stadium. More conversation about gender roles and romance in the African-American society.

In the next segment, Rufus Thomas performs "The Breakdown" and "Do the Funky Chicken." This is followed by another interlude with Pryor then a cover of "If Loving You is Wrong, I Don't Want to be Right" by soul singer . After the final interlude, enters the stadium to a large audience reaction. In the original version, MGM, the studio which had the rights to the songs "Theme from Shaft" and "Soulsville," didn't allow the film makers to use the songs in the film, so the song "Rolling Down A Mountain" was performed on a sound stage made to look like Wattstax at a later date. [citation|last=Bowman|first=R|year=1997|title=Soulsville, U.S.A.: The Story of Stax Records|page=293] These songs are restored on DVD release of the film. The camera pans out at the end of the stadium showing several people during the interludes in the film while the speech "I Am Somebody" is being shouted again followed by "Lift Ev'ry Voice and Sing" as the credits roll.

In September 2004, the PBS series "" aired a new documentary about the concert and the movie. That same month, the movie was released on DVD.French distribution:

Songs in the film

Other songs in the concert