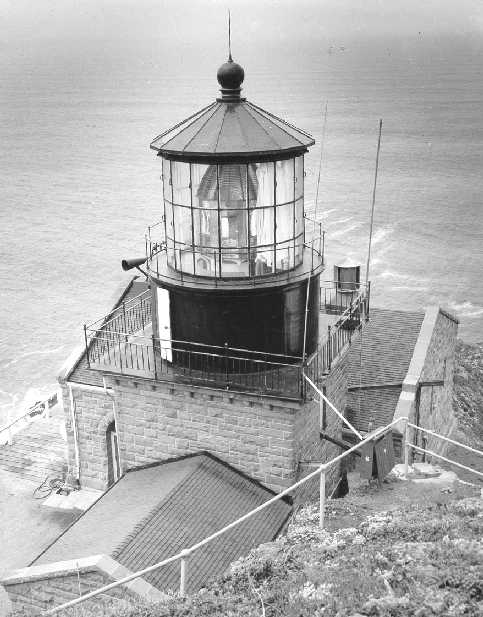 Point Sur Lighthouse is a located on , , , convert|135|mi|km|0 south of . Point Sur has long presented difficulty for ships, and after 11 years of petitioning the Board, money was allocated for the Point Sur Light in 1886. The lighthouse was completed in 1889 on Point Sur, which is a large, convert|361|ft|m|0|sing=on-tall rock. The light is still an active aid to navigation and is open to the public.

Point Sur began to have significant amounts offshore traffic beginning around 1849, the time of the , which caused an increased number of shipwrecks in that area. One shipwreck in particular, that of the "Ventura", influenced funding for the construction of the lighthouse. The captain of The "Ventura" was drunk, hitting a group of rocks just north of Point Sur, and many people died. The United States Lighthouse Board stated in 1874 that “Point Sur is the most important point and should be the site of a lighthouse. In considering the various points on the California coast where lighthouses are still required, Point Sur claims the place of greatest importance". Again, in 1885, the board stated that “this dangerous point, which is still unlighted, is made subject of much complaint.”

In 1886, after 11 years of petitioning, Congress allocated $50,000 to construct a lighthouse and another $50,000 the next year. The labor force consisted of 25 men. After building a road to the mainland, quarrying stone, and blasting a trail to the top of the rock, laborers began the construction of a tramway. By the end of the first year, all the rock had been quarried, and construction of many buildings was well underway. The Lighthouse Board hoped the construction would be completed by the end of 1888, but an additional $10,000 was needed, and the lightstation was not completed until August 1, 1889. When the keepers and their families came to Point Sur to live, they built a barn to house their cow and horse.

Life on Point Sur was very isolated because there was only one road to , and it was long and often dangerous. The keepers would receive goods and bulk supplies on a “lighthouse tender” boat roughly every four months. A ship brought the supplies over, then s brought them closer to shore, and they were finally floated to land in barrels. The first families that lived in the lighthouse were cared for by Doctor Roberts, who, in addition to being a doctor, played an instrumental part in petitioning for the construction of Highway 1. As road construction advanced, life on the Point Sur became less isolated. The light was automated by the in 1972. The lens was loaned to the of Monterey where it is currently on exhibit. In 2004, the Point Sur Lighthouse was officially transferred from the Coast Guard to California State Parks.

The Lighthouse has had four different light sources thought its history. First, it had an oil wick lamp, followed by an oil vapor lamp, and then two different kinds of electric lights. Three different fuels, , oil, and , were used while the oil lamps were in use. In order to concentrate the light and send it in one direction out to sea, the Lighthouse used a first-order . The lens was almost convert|9|ft|m|0 tall and weighs 4,330 pounds. The entire structure, including the pedestal and clockworks was convert|18|ft|m|0 tall and weighed 9,570 pounds.

In dense fog, where the light from the lighthouse may not be visible, Point Sur lighthouse used a foghorn to alert ships. Originally, a coal powered fog horn was used, but this labor-intensive system was replaced as soon as better technology was available. In 1972, the “Super Tyfon Double Fog Signal,” named after the giant from Greek mythology, was put into use. This system consisted of two compressed air horns sounding simultaneously, and could be heard up to three nautical miles (6 km) from Point Sur. The modern electric tone fog signal was a 12 volt high frequency fog signal with a sound range of half a nautical mile. The high frequency was very effective in fog.

Since the lighthouse keepers and their families lived in isolation, the seven main buildings helped them to be self-sustaining. First built was the , which originally held 53,000 gallons of water, pumped from a well in the sand flats at the base of the rocks. It was later replaced by a . There was also a nearby. For housing was the assistant keepers' dwelling, which housed three of the keepers and their families in separate quarters, and the head keeper's dwelling. Livestock for food and transportation was kept in the barn, and the top floor was used for storage. The carpenter and blacksmith shop held supplies for the keepers to do their own construction, since Monterey was a full day's trip away until the 1930s. Finally, the lighthouse was convert|40|ft|m|0 tall and convert|270|ft|m|0 above sea level. The lamp tower, oil room, and fog signal room were all combined into one building because of limited space.

Point Sur is the only complete turn-of-the-century lightstation open to the public in California, and is on the . The lightstation is part of . There are now three-hour walking tours guided by volunteers available year round.