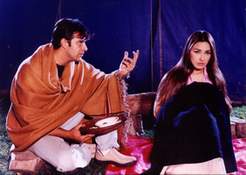 Fire is a story about Momi (Zeeshan) lives with his younger brother and mother. He works in office and he has a very thick friendship with (Bilal) who works with him in the office. Momi's younger brother who is engaged to Noman's sister, studies in a college. One day he has a bet with his fianceé and he kisses the hand of Meera who also studies there. Meera feels insulted and she goes to her brother Saud who is the "badmash" of the film.

Saud takes his men and goes to Momi's house and kills his brother and sets his house on fire. And then he kills Noman's sister as well. Since Meera thinks that she was responsible for making Momi's brother kiss her hand, Momi and Noman tries to file case against but hires a police officer who that police officer files a fake case of terrorism against Momi and his mother. In the jail Momi meets lady police officer, , who gets harsh with his mother and slaps his mother on her face. Momi gets mad and he by chance takes out revolver from 's belt and takes her to a deserted place.

On the other side also gets Noman and tortures him and kills his sister in front of him. In return, Noman kidnaps ('s sister). Momi and Noman decide on a meeting place and they take along and with them. Both of the protagonists run from there and take and with them. They reach a hilly area that is owned by a tribe. The son takes all four to the master of the tribe and there Momi and Noman tell their stories. and believe them and fall in love with them.

The most hyped film of the year after "", with an excellent star cast, the current Momi fever, average music and brilliant marketing, it may bring good news at the box-office initially, whether Fire has the fire or not. Fire was in news from the very start, utilized the star power of and and by making it an issue he tried to resolve the conflicts that both had developed over the years. So, Fire was very much news for that but then by casting in the leading pair, he once again tried to be somewhat different in his approach, but who knew that Fire was going to be such a disaster. Tall claims were made about the story and the music but sadly enough none comes even to average level.

The music in a way has become more important than the story and performance of actors. When was contacted to comment on the situation, he said ‘Music is part of film. It is not something extra. Good music is possible only when you have songs in line with the story. Luckily enough, I worked over the story first and then chalked out situations where I needed the help of music.

The choreography consists mainly of Latka and Jhatkas. The film's musical numbers include the song . stressed the importance of music in the film saying, "Music is part of film. It is not something extra. Good music is possible only when you have songs in line with the story. Luckily enough, I worked over the story first and then chalked out situations where I needed the help of music."