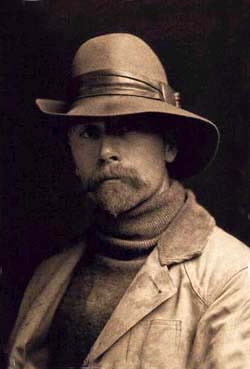 Edward Sheriff Curtis (, &ndash; , ) was a photographer of the and of Native American peoples.

Edward Curtis was born near .

Around 1874 the family moved from Wisconsin to , and Curtis built his own camera. In 1880 the family was living in , where Johnson Curtis was working as a retail grocer.

In 1885 at the age of seventeen Edward became an apprentice photographer in . In 1887 the family moved to , where Edward purchased a new camera and became a partner in an existing photographic studio with Rasmus Rothi. Edward paid $150 for his 50 percent share in the studio. After about six months, Curtis left Rothi and formed a new partnership with Thomas Guptill. The new studio was called Curtis and Guptill, Photographers and Photoengravers.

In 1895 Curtis met and photographed (c1800-1896) aka Kickisomlo, the daughter of of . This was to be his first portrait of a Native American. In 1898 while photographing , Curtis came upon a small group of scientists. One of them was , an expert on Native Americans. Grinnell became interested in Curtis' photography and invited him to join an expedition to photograph the Blackfeet Indians in Montana in the year 1900.

In 1910 the family was living in Seattle and on , , Clara filed for divorce. In 1919 she was granted the divorce and received the Curtis' photographic studio and all of his original camera negatives as her part of the settlement. Edward went with his daughter, Beth, to the studio and destroyed all of his original glass negatives, rather than have them become the property of his ex-wife, Clara. Clara went on to manage the Curtis studio with her sister, Nellie M. Phillips (1880-?), who was married to Martin Lucus (1880-?). In 1920 Beth Curtis and her sister Florence Curtis were living in a boarding house in Seattle. Clara was living in Charleston, with her sister Nellie and her daughter Katherine Curtis.

Around 1922 Curtis moved to Los Angeles with his daughter Beth, and opened a new photo studio. To earn money he worked as an assistant cameraman for and was an uncredited assistant cameraman in the 1923 filming of "The Ten Commandments". On October 16, 1924 Curtis sold the rights to his ethnographic motion picture "In the Land of the Head-Hunters" to the . He was paid $1,500 for the master print and the original camera negative. It had cost him over $20,000 to film.

In 1927 after returning from to Seattle with his daughter Beth, he was arrested for failure to pay alimony over the preceding 7 years. The total owed was $4,500, but the charges were dropped. For Christmas of 1927, the family was reunited at daughter Florence's home in . This was the first time since the divorce that Curtis was with all of his children at the same time, and it had been thirteen years since he had seen Katherine. In 1928, desperate for cash, Edward sold the rights to his project to J.P Morgan's son. In 1930 he published the concluding volume of "The North American Indian". In total about 280 sets were sold of his now completed "opus magnum". In 1930 his ex-wife, Clara, was still living in Seattle operating the photo studio with their daughter Katherine. His other daughter, Florence Curtis, was still living in Medford, Oregon with her husband Henry Graybill. In 1932 his ex wife, Clara, drowned while rowing in , and his daughter, Katherine moved to California to be closer to her father and her sister, Beth.

Loss of rights to "The North American Indian"

In 1935 the rights and remaining unpublished material were sold by the Morgan estate to the Charles E. Lauriat Company in Boston for $1,000 plus a percentage of any future royalties. This included 19 complete bound sets of "The North American Indian", thousands of individual paper prints, the copper printing plates, the unbound printed pages, and the original glass-plate negatives. Lauriat bound the remaining loose printed pages and sold them with the completed sets. The remaining material remained untouched in the Lauriat basement in Boston until they were rediscovered in 1972.

On , , at the age of 84, Curtis died of a heart attack in in the home of his daughter, Beth. He was buried at Forest Lawn Memorial Park in Hollywood Hills, California. His terse obituary appeared in on , :

Edward S. Curtis, internationally known authority on the history of the North American Indian, died today at the home of a daughter, Mrs. Bess Magnuson. His age was 84. Mr. Curtis devoted his life to compiling Indian history. His research was done under the patronage of the late financier, . The foreward [sic] for the monumental set of Curtis books was written by President . Mr. Curtis was also widely known as a photographer.

Curtis archive at the Library of Congress

The Prints and Photographs Division Curtis collection consists of more than 2,400 silver-gelatin, first generation photographic prints &mdash; some of which are sepia-toned &mdash; made from Curtis's original glass negatives. Most of the photographic prints are 5" x 7" although nearly 100 are 11" x 14" and larger; many include the Curtis file or negative number within the image at the lower left-hand corner.

Acquired by the through copyright deposit from about 1900 through 1930, the dates on the images reflect date of registration, not when the photograph was actually taken. About two-thirds (1,608) of these images were not published in the North American Indian volumes and therefore offer a different and unique glimpse into Curtis's work with indigenous cultures. The original glass plate negatives which had been stored and nearly forgotten in the basement of New York's Pierpont Morgan Library were dispersed during World War II. Many others were destroyed and some were sold as junk.

Around 1970, Karl Kernberger of went to Boston to search for Curtis' original copper plates and s at the Charles E. Lauriat rare bookstore. He discovered almost 285,000 original photogravures as well as all the original copper plates. With Jack Loeffler and David Padwa, they jointly purchased all of the surviving Curtis material that was owned by Charles Emelius Lauriat (1874-1937). The collection was later purchased by another group of investors led by Mark Zaplin of Santa Fe. The Zaplin Group owned the plates until 1982, when they sold them to a California group led by Kenneth Zerbe, the current owner of the plates as of 2005.

Dr. purchased 110 prints that Curtis had made for his 1905-1906 exhibit and donated them to the , where they remain. The 14" by 17" prints are each unique and remain in pristine condition. Clark Worswick, curator of photography for the museum, describes them as:

"...Curtis' most carefully selected prints of what was then his life’s work...certainly these are some of the most glorious prints ever made in the history of the photographic medium. The fact that we have this man’s entire show of 1906 is one of the minor miracles of photography and museology."

Curtis has been praised as a gifted photographer but also criticized for manipulating his images by professional ethnologists. Curtis' photographs have been charged with misrepresenting Native American people and cultures by portraying them in the popular notions and stereotypes of the times. Although the early twentieth century was difficult time for most Native communities in America, not all natives were doomed to becoming a "vanishing race."

In many of his images Curtis removed parasols, suspenders, wagons, and other traces of Western and material culture from his pictures. In his photogravure [http://memory.loc.gov/cgi-bin/query/r?ammem/curt:@field(DOCID+@lit(cp06005)) "In a Piegan Lodge"] , published in "The North American Indian", Curtis retouched the image to remove a clock between the two men seated on the ground. [cite web |url=http://memory.loc.gov/ammem/award98/ienhtml/essay3.html |title=Edward Curtis: Pictorialist and Ethnographic Adventurist |accessdate=2007-08-26 |quote= |publisher= ]

He also is known to have paid natives to pose in staged scenes, wear historically inaccurate dress and costumes, dance and partake in simulated ceremonies. [cite web |url=http://www.collectorsguide.com/fa/fa047.shtml |title=The Shadow Catcher |accessdate=2007-08-26 |quote= |publisher= ] In Curtis' picture [http://memory.loc.gov/cgi-bin/query/r?ammem/curt:@field(DOCID+@lit(cp03002)) "Oglala War-Party"] , the image shows 10 Oglala men wearing feather headdresses, on horseback riding down hill. The photo caption reads, "a group of Sioux warriors as they appeared in the days of inter tribal warfare, carefully making their way down a hillside in the vicinity of the enemy's camp." In truth headdresses would have only been worn during special occasions and, in some tribes, only by the chief of the tribe. The photograph was taken in 1907 when natives had been relegated onto reservations and warring between tribes had ended. Curtis paid natives to pose as warriors at a time when they lived with little dignity, rights, and freedoms. It is therefore suggested that he altered and manipulated his pictures to create an ethnographic simulation of Native tribes untouched by Western society.


*1868 Curtis is born near Whitewater, Wisconsin and grows up near Cordova, Minnesota.
*1880 with living in

*; , ; ", , . Edward S. Curtis of , is the guest of Mrs. J. Stuart White at the Briarcliff Lodge. of New York is at the lodge for a short stay previous to sailing for Europe.

*Barbara A. Davis, "Edward S. Curtis: The Life and Times of a Shadow Catcher"
*Edward Sheriff Curtis, Book of his photos published 2008 by