Mémoires d'Outre-Tombe - literally "Memoirs from Beyond the Grave" - is an autobiography in 42 volumes by François-René de Chateaubriand, published posthumously in 1848. This autobiography is considered[who?] one of the most important in Western culture.

Although the work shares characteristics with earlier French "memoirs" (like the Memoirs of Saint-Simon), the Mémoires d'Outre-Tombe are also inspired by the Confessions of Rousseau; in addition to providing a record of political and historical events, Chateaubriand includes details of his private life and his personal aspirations.

The work abounds in instances of the poetic prose at which Chateaubriand excelled. On the other hand, the melancholy of the autobiography helped establish Chateaubriand as the idol of the young French Romantics; a young Victor Hugo wrote: "I will be Chateaubriand or nothing." 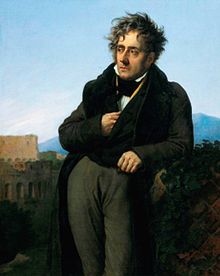 Genesis of the work

Chateaubriand made the decision to write his memoirs in Rome at the close of 1803; nevertheless, he did not begin writing them until 1809, and even then found his progress slowed by numerous other projects. In 1817 he returned to the memoirs; the first manuscript, probably written while he was serving as ambassador to London, did not reach completion until 1826. At this point, he intended to entitle the book Memories of My Life.

In 1830, however, Chateaubriand decided to change the scope of the work, revising the title to Mémoires d'Outre-Tombe, making a thorough revision of the original text, and writing several new volumes. He divided his life before 1830 into three periods: soldier and traveler, novelist, and statesman. The project had by now become more ambitious; indeed, he tried to reproduce not only his personal exploits, but the epic historical and political events of the era.

After fragmented public readings of his work in salons, in 1836 Chateaubriand yielded the rights to his work to a society that published it until his death, paying him accordingly. Having obtained this economic stability, he completed the work with a fourth set of volumes. In 1841 he wrote an ample conclusion.

Chateaubriand had originally intended to have the work published at least fifty years after his death, but his financial troubles forced him, in his words, "to mortgage his tomb."