Head in the Clouds

Head in the Clouds 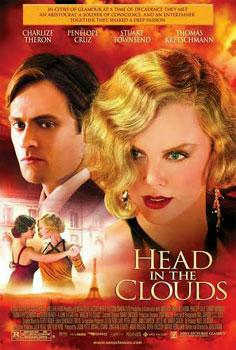 "Head in the Clouds" is a 2004 film British/Canadian written and directed by . The original focuses on the choices young lovers must make as they find themselves surrounded by increasing political unrest in late-1930s .

In a , young Gilda Bessé, the daughter of a French aristocrat and an emotionally unstable American mother, reluctantly is told the life line on her palm doesn't extend past the age of thirty-four by a fortune teller. Fast forward to a rainy night in 1933, when she stumbles into the room of Guy Malyon, a working-class Irishman who is a first-year student on at . She has had a lover's quarrel with one of the dons, and rather than turn her out into the storm, Guy gallantly allows her to spend the night. Later, they become lovers, but the two are separated when Gilda's mother dies and she opts to leave England. Several years later, Guy sees her as an extra in a Hollywood film, and shortly after he coincidentally receives a letter from her inviting him to visit her in , where she's working as a photographer.

He discovers she is living with the Spanish-born nursing student/model Mia and has a lover, whom she quickly discards when Guy moves in. The trio are enjoying their unusual living arrangement, but world events are beginning to affect their existence. It is the height of the , and idealistic Guy, a long-time supporter of the army of the , is determined to do what he can to help them as 's fascists gain strength. Mia, too, is anxious to come to the aid of her native land. Gilda, however, has no interest in politics or anything else that might disrupt her life of luxury, and pleads with the two to ignore the conflict, but they feel compelled to act and depart for Spain.

Guy becomes a soldier, while Mia tends to the wounded. They cross paths one night and, before making love to Guy, Mia confesses she was Gilda's lover. In the morning, her ambulance is destroyed by a , and after laying her to rest, Guy returns to Paris, where he is ignored by Gilda, who feels his abandonment of her was a form of betrayal.

Six years later, Guy is working as a spy with the underground in occupied Paris under the auspices of British intelligence. He learns Gilda has taken Nazi Major Franz Bietrich as a lover and visits her in their old apartment, where the two make love. The following morning she tells him their affair is over and the two never can see each other again. is approaching, and Guy throws himself into his work. One day he arrives at a café to meet a contact, but instead is approached by Gilda, who has overheard her German lover's plotting a trap and has come to help him escape in cleric's clothing she has concealed in the restaurant's . That night, he and his associates destroy a rail station, but only Guy manages to elude the German soldiers.

Guy returns to London, where he discovers Gilda joined the Resistance a few years earlier. With the occupation of Paris having come to an end, he realizes the locals, who long regarded Gilda as a Nazi sympathizer and traitor, will seek revenge for what they perceive to be her lack of loyalty and patriotism. As he returns to Paris to find her, Guy is unaware Bietrich has been killed in Gilda's apartment and she has been taken captive by a mob intent on avenging the deaths of their loved ones.

In his review in the "", Stephen Holden said, "The strength of [Charlize Theron's] go-for-broke performance only underlines the weaknesses of the film . . . [which] plays like an entertaining compilation of Hollywood's favorite s" and added, "Could it be that Hollywood's six decades of replaying the Good War has left us with nobility fatigue? At least "Head in the Clouds" is not the debacle of "Charlotte Gray" and other epic-manqués. But if World War II is to continue to mean anything anymore, it has to be reimagined as a real event, not a deluxe, romantically spiced-up newsreel." [ [http://movies.nytimes.com/2004/09/17/movies/17HEAD.html "New York Times" review] ]

of the "" said the film "is silly and the plot is preposterous, but it labors under no delusions otherwise. It wants to be a hard-panting , with spies and sex and love and death, and there are times when a movie like this is exactly what you feel like indulging." [ [http://rogerebert.suntimes.com/apps/pbcs.dll/article?AID=/20041001/REVIEWS/40920007/1023 "Chicago Sun-Times" review] ]

of "" awarded it one out of a possible four stars and described it as "a World War II melodrama of epic silliness and supreme vapidity . . . This spark-free film has no place to go on [the cast's] resumes except under the heading of "Cringing Embarrassment"." [ [http://www.rollingstone.com/reviews/movie/6168962/review/6485121/head_in_the_clouds "Rolling Stone" review] ]