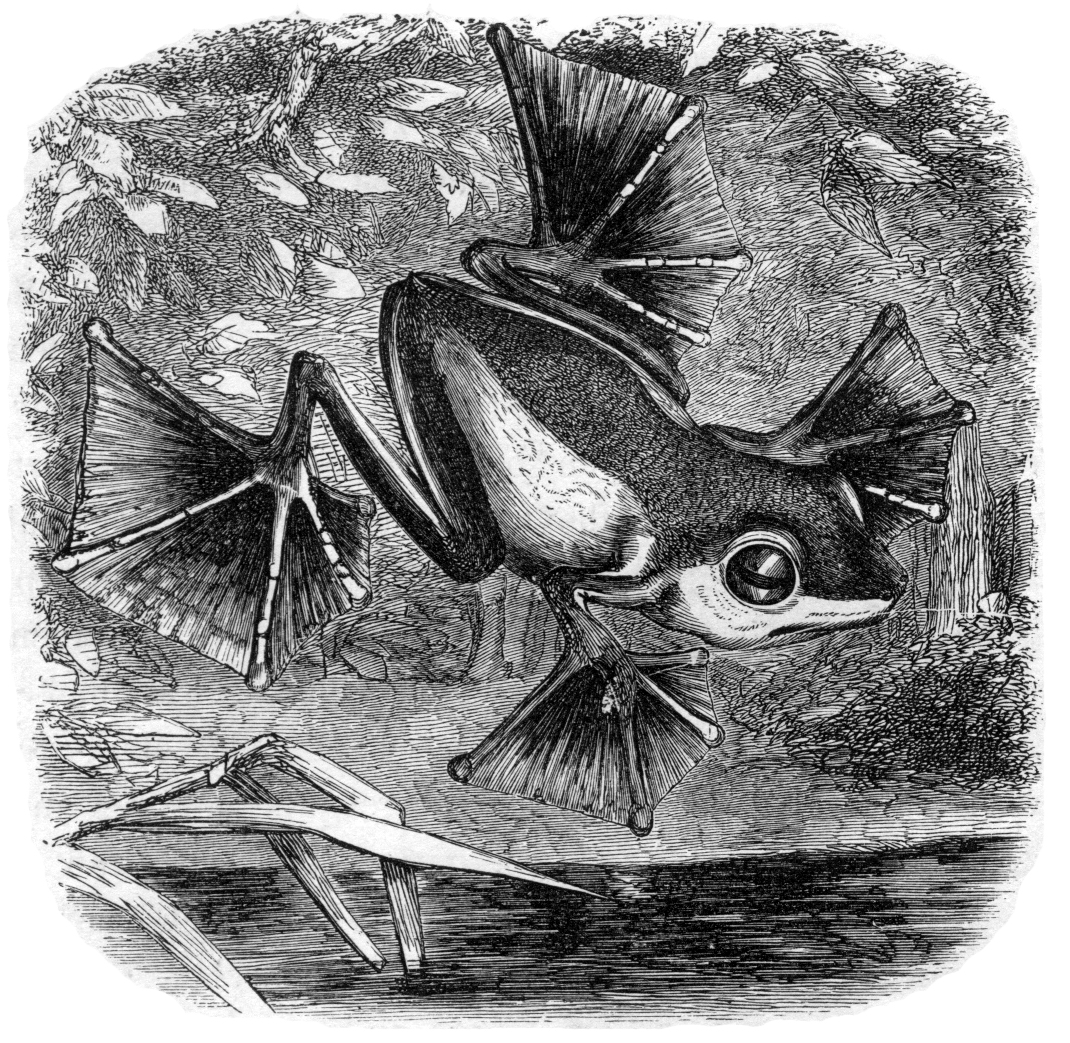 The "Rhacophorus nigropalmatus", commonly known as Wallace's Flying Frog, is a found at least from to into western . It is named for the biologist, Alfred R. Wallace, who collected the first specimen to be formally identified.

"R. dennysii", "R. maximus" and "Polypedates feae" were once contained within Wallace's Fyling Frog as . Similar frogs also occur in , and southern ; these may be "R. nigropalmatus" or an undescribed closely related species.

This frog is quite , due to its large size, brilliant colors, and interesting behavior [Sukumaran (2005)] . With a body length of 80-100 mm (males are smaller than females), it is one of the largest species of "". Its eyes and are large, its limbs are very long, and its fingers and toes are webbed right to the tips. Together with a fringe of skin stretching between the limbs, this can parachute to the forest floor from high up in the trees where it is normally found.

Its back is bright shiny green and the underside is white to pale yellow. The upperside of the inside toes as well as the outer part of the toe and finger webbing is brilliant yellow. The base of the webs as well as one flank spot per side are jet black. Overall, this frog looks much like the ("R. reinwardtii") or "R. kio", which even if full grown do not reach the size of Wallace's Flying Frog however, and have the fringe of the webs more orange.

This species' verified range extends from south to and on the ; in the n it is found on and . It is a lowland species, occurrring up to 600 meters ASL.

It is most frequently found in and perhaps (to the north of its known range) primary , but will also inhabit old and overgrown fields. It avoids open areas and low growth, depending on a mixed growth containing trees of several meters height. Usually it is not often encountered, preferring a life up in the treetops. In breeding season hovever, these frogs descend to pools on the forest floor, often in considerable numbers. As usual for moss frogs, its eggs are attached to shrubs overhanging such pools and puddles, from where the s drop down into the water after hatching.

Due to its wide range, Wallace's Flying Frog is not considered threatened by the .