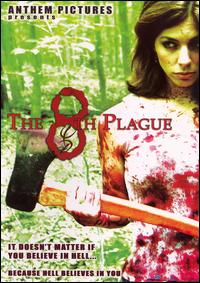 "The 8th Plague" is a 2006 low-budget American . The film stars , , , and . It was directed by . The film covers the story of Launa, a woman who is inspecting the disappearance of her sister, Nikki. It was filmed in between August and June .

Launa is investigating the disappearance of her sister, Nikki, who had gone camping in the mountain town of Halcyon Springs but never returned. With the help of Mason, a strange local man, her search leads her to an abandoned , known as the Halcyon Ridge Correctional Facility, which lies in the forests near the town. Determined to find out the reasons for her sister's disappearance, she enters the facility and discovers an ancient evil that is waiting to be revived, in the form of a plague of darkness which is ready to spread across the world.

* It Doesn't Matter if You Believe in ... Because Hell Believes in You
* The Writing is on the Wall