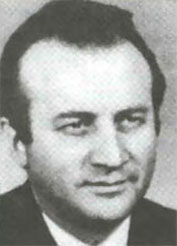 Jozef Lenárt ( in , &ndash; in ) was a Slovak politician.

He graduated from a chemistry high school and worked for the company. He became a member of the ("KSČ") and of the Communist Party of Slovakia ("KSS").

Although a Slovak, he became a Czech citizen after the country had split in 1993.

On the basis of insufficient evidence, on Lenárt was acquitted of treason charges (along with his co-defendant ), related to his handling (or lack thereof) of the events in 1968. He was accused of attending a meeting at the Soviet embassy in Prague on the day after the 1968 invasion, planning to establish a new "workers and farmers"' government.

Jozef Lenárt was one of the most resilient figures in Czechoslovakia's communist hierarchy, occupying one post or another in the leadership for no less than a quarter of the century. That achievement was all the more remarkable because his career at the top straddled a succession of regimes and several abrupt changes in policy.