Clutter is a term used for unwanted echoes in electronic systems, particularly in reference to radars. Such echoes are typically returned from ground, sea, rain, animals/insects, chaff and atmospheric turbulences, and can cause serious performance issues with radar systems.

What is considered to be clutter by one user may be a target for another. Usually targets may be considered to be a point scatterer and clutter as extended, covering many range, angle and Doppler cells. The clutter may fill a volume (rain) or be confined to a surface (land). In principle all that is required to estimate the return (backscatter) is a knowledge of the volume or surface illuminated and the echo per unit volume, η, or per unit surface area, σ°, (the backscatter coefficient).

In addition to any possible clutter there will also always be noise. The total signal competing with the target return is thus clutter plus noise. In practice there is often either no clutter or clutter dominates and the noise can be ignored. In the first case the radar is said to be Noise Limited, in the second it is Clutter Limited.

Rain, hail, snow and chaff are examples of volume clutter. An airborne target, at range R, is within a rainstorm. What is the effect on the detectability of the target?

First find the magnitude of the clutter return. Assume that the clutter fills the cell containing the target, that scatterers are statistically independent and that the scatterers are uniformly distributed through the volume. The clutter volume illuminated by a pulse can be calculated from the beam widths and the pulse duration, Figure 1. If c is the velocity of light and τ is the time duration of the transmitted pulse then the pulse returning from a target is equivalent to a physical extent of cτ, as is the return from any individual element of the clutter. The azimuth and elevation beamwidths, at a range R, are θ / 2 and ϕ / 2 respectively if the illuminated cell is assumed to have an elliptical cross section.

The volume of the illuminated cell is thus:

For small angles this simplifies to:

The clutter is assumed to be a large number of independent scatterers that fill the cell containing the target uniformly. The clutter return from the volume is calculated as for the normal radar equation but the radar cross section is replaced by the product of the volume backscatter coefficient, η, and the clutter cell volume as derived above. The clutter return is then

A number of simpliflying substitutions can be made. The receiving antenna aperture is related to its gain by:

and the antenna gain is related to the two beamwidths by:

The same antenna is generally used both for transmission and reception thus the received clutter power is:

with a resulting expression for the signal to clutter ratio of

Clearly narrow beamwidths and short pulses are required to reduce the effect of clutter by reducing the volume of the clutter cell. If pulse compression is used then the appropriate pulse duration to be used in the calculation is that of the compressed pulse, not the transmitted pulse.

A problem with volume clutter, e.g. rain, is that the volume illuminated may not be completely filled, in which case the fraction filled must be known, and the scatterers may not be uniformly distributed. Consider a beam 10o in elevation. At a range of 10 km the beam could cover from ground level to a height of 1750 metres. There could be rain at ground level but the top of the beam could be above cloud level. In the part of the beam containing rain the rainfall rate will not be constant. One would need to know how the rain was distributed to make any accurate assessment of the clutter and the signal to clutter ratio. All that can be expected from the equation is an estimate to the nearest 5 or 10 dB.

The surface clutter return depends upon the nature of the surface, its roughness, the grazing angle (angle the beam makes with the surface), the frequency and the polarisation. The reflected signal is the phasor sum of a large number of individual returns from a variety of sources, some of them capable of movement (leaves, rain drops, ripples) and some of them stationary (pylons, buildings, tree trunks). Individual samples of clutter vary from one resolution cell to another (spatial variation) and vary with time for a given cell (temporal variation). 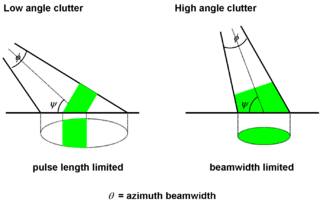 For a target close to the Earth's surface such that the earth and target are in the same range resolution cell one of two conditions are possible. The most common case is when the beam intersects the surface at such an angle that the area illuminated at any one time is only a fraction of the surface intersected by the beam as illustrated in Figure 2.

For the pulse length limited case the area illuminated depends upon the azimuth width of the beam and the length of the pulse, measured along the surface. The illuminated patch has a width in azimuth of

The length measured along the surface is

The area illuminated by the radar is then given by

For 'small' beamwidths this approximates to

The clutter return is then

Substituting for the illuminated area A

where σo is the back scatter coefficient of the clutter. Converting θ to degrees and putting in the numerical values gives

In the case of surface clutter the signal to clutter now varies inversely with R. Halving the distance only causes a doubling of the ratio (a factor of two improvement).

Problems in calculating clutter for the Pulse length Limited Case

The calculation is similar to the previous examples, in this case the illuminated area is

which for small beamwidths simplifies to

The clutter return is as before

Substituting for the illuminated area A

This can be simplified to:

As in the case of Volume Clutter the Signal to clutter ratio follows an inverse square law.

The general significant problem is that the backscatter coefficient cannot in general be calculated and must be measured. The problem is the validity of measurements taken in one location under one set of conditions being used for a different location under different conditions. Various empirical formulae and graphs exist which enable an estimate to be made but the results need to be used with caution.