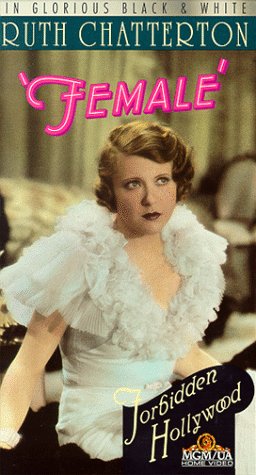 Alison Drake (Ruth Chatterton) is a hard-driving, no-nonsense, wealthy owner and head of a large automobile company. Her work has caused her to lose her youthful romanticism, and she has casual affairs with men, not excluding her own employees.

Alison hosts a party at her mansion, but becomes fed up with the men out to either sell her things or marry her for her money. She changes her clothes and goes to an amusement park, where she picks up a man at a . They have fun together, but he refuses her offer to go home with him.

The next day, they meet again at her factory. To her astonishment, he turns out to be Jim Thorne (George Brent), a gifted engineer she has ordered her underlings to hire away from her competition. Saying that she has no time now, Alison has him come to her mansion that night, supposedly to discuss his plans in detail. She attempts to seduce him, but he rejects her as anything other than his employer.

Annoyed, she turns to her assistant, Pettigew (Ferdinand Gottschalk), for advice. He tells her that men want women who are softer and less independent, so she adjusts her tactics. She tricks Jim into a picnic and wears him down. In the end, he succumbs to her charms.

The next day, he shows up at her office with a marriage license, but she informs him that she is likes their relationship just the way it is. Outraged, he quits.

Alison has another problem on her hands. Her company needs more financing to survive, but another firm is intent on taking advantage of the situation to take over and has gotten the local banks to turn her down. She sets up an appointment to meet with bankers in , but then breaks down when she realizes that she cannot live without Jim.

She has the police track down which way he went and drives off after him. She eventually finds him (at another shooting gallery) and tells him that she is willing to get married. Then, he realizes that they can fly to New York in time to save her company. Even so, she tells him that he will run the firm, while she has nine children.

Three directors worked on this film. began the film, and took over to complete it when Dieterle became ill. When Warner's production head, , decided he didn't like an actor in the film (either or , depending on the source), Wellman wasn't available because he had starting shooting "", so was brought in to re-shoot with as the replacement actor. Curtiz ended up with the sole screen credit. [IMDB [http://imdb.com/title/tt0024008/ Female] ]