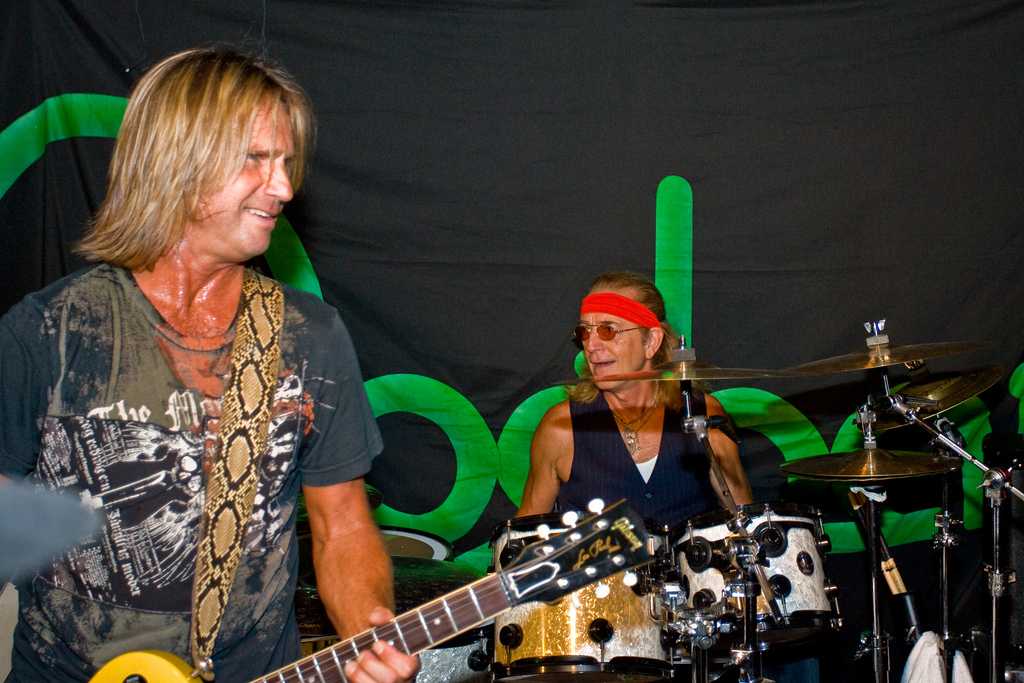 Foghat are a British rock band who had their peak success in the mid- to late-1970s. Their style can be described as "," dominated by electric and electric slide guitar. The band has achieved five s. The group remained popular during the disco era, but their popularity waned in the early 1980s.

The band initially featured ("Lonesome Dave") on guitar and vocal, on bass, and on drums. After leaving in December 1970, they added on guitar/slide guitar and formed Foghat in January 1971. Their 1972 album "Foghat" was produced by and had a cover of 's "" which received much airplay, especially on FM stations. The band's second self-titled album was also known as "Rock and Roll" for its cover photo of a rock and a bread roll, and it went gold. "Energized" came out in 1974, followed by "Rock and Roll Outlaws" and "" in 1975, the year that Stevens left the band after objecting to their endless touring schedule. Stevens was replaced temporarily by producer in 1975 when the band recorded "". In the next year, he was replaced by Craig MacGregor and the group produced "Night Shift" in 1976, a live album in 1977, and "Stone Blue" in 1978, each reaching "gold" record sales. "" spawned the hit single "" (which reached number 20 on the US charts), but the greatest sales figures were for "Foghat Live", which sold over 2,000,000 copies. More hits followed: Drivin' Wheel, I Just Want to Make Love to You (from the live album), Stone Blue and Third Time Lucky (The First Time I Was a Fool). But Rod Price, unhappy with the group's still constant touring and the shift away from their hard boogie sound towards a more New Wave influenced Pop direction, left the band in November 1980. After months of auditions he was replaced by by February 1981.

After 1978, Foghat record sales began to slip, and their last album for the Bearsville label, "Zig-Zag Walk" in 1983, only briefly touched the charts at #192. MacGregor quit in 1982 and Nick Jameson returned to play on "In the Mood For Something Rude" and "Zig Zag Walk" before turning things over to Kenny Aaronson(1983) and then Rob Alter(1983-1984). MacGregor returned in 1984 bringing along multi instrumentalist Jason "Bakko" Bakken.

Lonesome Dave himself had returned to the U.S. by 1990 and formed his own Lonesome Dave's Foghat that featured Bryan Bassett (ex Wild Cherry), Stephen Dees (bass) and Eddie Zyne (drums). Dees and Zyne had played with , among others. Former bassist Riff West succeeded Dees in 1991 and Rod Price even did the odd guest appearance.

In 1993, at the urging of producer , the original lineup reunited. Though Rubin ultimately proved to be unavailable to produce their comeback project, the group went ahead anyway and released a studio album entitled "Return of the Boogie Men" in 1994 and a live album entitled "Road Cases" in 1998. The final album of the decade, "" from the syndicated radio show of the same name, was released in May 1999, and consisted of live recordings from 1974 and 1976.

After being back together six years, the original lineup once again ended after Price decided to retire from touring for good. Bryan Bassett (who'd been playing with Molly Hatchet in the interim) was brought back on guitar.

The 2000s saw the death of founding members Dave Peverett and . Peverett died on February 7, 2000 from cancer, and Price died on , &ndash; the first without the late "Lonesome Dave" Peverett. As of 2005, Tony Stevens has been replaced again by Craig MacGregor. In 2006, a follow up to the best-selling Live album was released - .

* In the "Spinal Tap Goes to 20", members of the band claimed that the plot and many of the incidents in "" were based on Foghat.
* In the deleted scenes of the "Scrubs" episode "My Way Home", Ted the lawyer explains to J.D that he is changing the name of his band from "The Worthless Peons" to "Foghat" because a Danish metal band was suing them.
* Drummer Roger Earl sported one of the biggest mustaches among rock stars. To the dismay of many fans, he decided to shave it off before many of later reunion concerts.
* , a character in the TV series "", expressed in a commercial that he was a fan of Roger Earl, saying "I like the drummer from Foghat. That's my drummer." [http://video.google.com/videoplay?docid=-1944722188070238]
* The TV show "Still Standing" has a character that plays in a Foghat tribute band.
* Their song "Slow Ride" was featured in the 1993 American movie "Dazed and Confused". It has also been used in an episode of "", an episode of "", an episode of and an episode of "", where a scene from Dazed and Confused is mocked when the "evil monkey" rolls and smokes a joint while laying in bed with his headphones on. It was also featured in the TV series "Dexter" in 2006, in the episode "Father Knows Best", when Dexter and friends are cleaning the house he inherited. The song pulls station owner Jimmy James out of a coma in an episode of "". It was featured in the radio station of the video game ', and an advertisement for the , and also an ad for . The song was also used in the movie "", released in 2007. It is also featured in ', and it's considered one of the easiest songs.
* Most if not all tracks from "Foghat Live" are featured as party music in the 1981 action-thriller film "Nighthawks", starring , , and - though the actual score is by .
* Roger Earl's brother, Colin, was a founding member of , who had a hit of their own with "".
* In the music video for 's "Sugarcube", the members of Yo La Tengo are sent to "The Academy of Rock" by their record company. There, one of the teachers informs them of the "Foghat Rule", which is that any fourth rock album must be double live. It was actually their 7th album that was their first live album.
* In March 2005, a high school student located in , petitioned his school principal to have "Slow Ride" by Foghat played as the school lunch bell. After lengthy battles with the administration, threats of hunger strikes and anarchy, an agreement was reached. On March 18th, Bonita Vista High School played Foghat's "Slow Ride" as their lunch passing period bell. [http://www.signonsandiego.com/news/education/20050319-9999-6m19foghat.html]
* In the Fox TV series "", says, "I made most of my life decisions at a Foghat concert... I stand by them."
* Roger Earl had a famous but brief fling with Swedish actress and .
* On 's CD "", Foghat are mentioned in the track "The Christmas Story". The main character in that track, Bejesus, was special because he was conceived at a Foghat concert in the third row during the song "Slow Ride".
* In the 1996 comedy "Kingpin", Claudia tells Roy Munson, "Your act is about as fresh as a Foghat concert. It really bites, Roy."
*In the "" episode, "", the radio talk show host interviewing Krusty the Clown's father can be seen wearing a Foghat T-shirt.
* Back in the '70s, when they were popular, fans would commonly be found wearing hats with the word "Fog."
* In the video game "", there is a banner advertising the "Fools for the City", a Foghat tribute band (including former members of Foghat), whom Larry Lovage, the main character refers to as "The best Foghat tribute band in Walnut Log, bar none."
* A song entitled "Wear Your Foghat With Pride" appears on the "" album "".
* The Estate of Lonesome Dave opened a store in late 2007 called 'Loentz's Emporium' as well as a Myspace site called Myspace.com/foghatmusic
* In an episode of the popular TV sitcom , Robert's brother-in-law, Peter, gets upset when his parents decide to kick him out of the house and when he finds out that they are throwing away his music, he says "Mama, what are you doing with my Foghat records?", implying the fact that Peter listens to Foghat.
* In The Beastie Boys video for "Hey Ladies!" MCA (Adam Yauch) inserts a Foghat 8 track cassette into the dash player.
* Foghat is no longer allowed to stay at the Radisson chain of hotels after the band threw a television out of their 8th story window at the Radisson in Toronto.