"Veer-Zaara" (: वीर-ज़ारा, : ویر زارا) is a 2004 Indian film directed by . The movie stars , and in the leading roles, with , and in supporting roles. Veteran actors and make special appearances in the film. The dialogues were written by .

Set against the backdrop of conflict between and , this romance follows the unfortunate love story of an Indian officer, Veer Pratap Singh, and a Pakistani woman, Zaara Haayat Khan, who are separated for about twenty years. The story deepens with the arrival of Saamiya Siddiqui, a Pakistani lawyer, who finds Veer in prison, and upon listening to their story, tries to bring the lovers together.

Most of the story is told in flashback from Veer's prison cell.

Zaara Haayat Khan () is an independent, carefree, and sprightly young Pakistani girl travelling to India. Her bus, which is traveling to India with her "bebe's" (a Punjabi word to denote mother or grandmother, but here used for Zaara's old governess) ashes. Before dying, "Bebe" () begs Zaara to fulfill her final wish - to take her ashes to India, to the holy Sikh city of Kiritpur, and scatter her ashes in the river there, among her ancestors. Zaara decides to carry out Bebe's dying wish.

In India, Zaara's bus gets into an accident, overturns, and she is saved by an Indian pilot, Squadron Leader Veer Pratap Singh (). Zaara completes her Bebe's final rites with the help of Veer. He convinces Zaara to go back to his village with him, and spend one day together. Veer then takes Zaara on a tour of India's Punjab and they visit Veer's hometown during the festival. The two fall in love and Veer is just waiting for the right time to tell Zaara how he feels about her. But then it is revealed that Zaara is engaged to another man, Raza (). During their last few moments together, Veer confesses his love, then watches sadly as Zaara boards the train that will take her back to Pakistan. Both believe that this is the end of the story, and the last time they will ever see each other.

Zaara eventually realizes that she loves Veer and cannot marry her fiancé; Veer, after being told over the phone by Zara's friend Shabbo, that how miserable Zara is without him, quits the Indian Air Force and goes to Pakistan to bring her back with him to India. Zaara's mother, however, begs him to leave Zaara. Zaara's father is a high-profile politician whose reputation will be ruined if news got out that his daughter is in love with a Hindu man. Veer respects this and decides to leave. But Zaara's fiancé, outraged by the shame Zaara has brought upon him, frames Veer and has him wrongly imprisoned for being an Indian spy.

22 years later, Veer meets Saamiya Siddiqui (), who is an idealistic Pakistani lawyer, whose mission in life is to pave the path for women's empowerment. To dissuade a female lawyer from being successful, she has been given Veer's case, an impossible case to many. The man has been languishing in prison and has not spoken for the last 22 years.

Veer tells Saamiya she can do anything for the case except mention, much less subpoena, Zaara's family. He's assigned the number 786 for his prisoner number. This convinces Saamiya that God has chosen Veer for some special purpose, and determined to exonerate him, and restore his name, identity and country.

After a number of attempts which fail to prove Veer's innocence, Saamiya goes to Veer's village in India to gather evidence proving Veer is Veer and not Rajesh Rathore the spy. There, Saamiya finds Zaara has taken over in the village for Veer's parents. Saamiya convinces Zaara to go back to Pakistan with her and finally tell the truth about Veer's identity. The judge releases Veer from prison and apologizes on behalf of Pakistan. After Veer is finally released, he and Zaara return to India together, at last reunited. 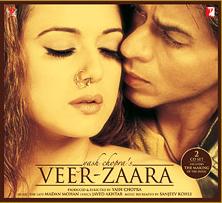 The soundtrack was released on and specially on . The music is based on old and untouched compositions by the late , as revised by his son, Sanjeev Kohli. Lyrics were contributed by .

Yash Raj Music also released complete background music of "Veer-Zaara", this being a rarity. The was titled "The Love Legend Themes - Instrumental".

The famous sang most of the songs. She used to sing with Madan Mohan, so there was a special poignancy to her contributions. According to Yash Chopra, upon coming for the recording, with tears in her eyes, Mangeshkar told him, "Madan Mohan was like my brother. You [Chopra] are like my brother. I feel I have gone back in past." Other singers: , , , , , Ahmed and Mohhamed Hussain, appeared in the soundtrack.

returned to directing after eight years, his last directed film being "" (1997). The film was originally going to be called "Yeh Kahaan Aa Gaye Hum", a name take from the title of a song in the movie (1981). The director, Yash Chopra, eventually decided on "Veer-Zaara" as a title. However, one of the songs in the film is called "", a twist on the proposed title.

The film was a success not only in and , but overseas, notably in , , , and the . It earned Rs. 357 million in the overseas markets, making it 2004's top-grossing Bollywood production overseas.

"Veer-Zaara" received fifteen nominations. It won awards for best dialogue, story, movie and lyrics. The film was nominated for the following awards (Filmfare wins in bold. Other sections present only the wins):

On June 6, 2005 the released the DVD of Veer-Zaara on a Collector's Double DVD Pack, with the disc one containing the original film and second disc having special features, e.g. making of the songs (with little original melodies), interview with Yash Chopra, premier, deleted scenes, trailers and promo and deleted song .