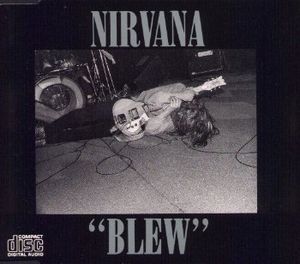 "Blew" is the title of a song and EP by the American grunge band Nirvana.

"Blew" was written in 1988 by Nirvana frontman . The song was recorded in December of 1988 and initially appeared as the first track on Nirvana's 1989 debut album "Bleach".

On the EP, as well as Nirvana's "" LP, "Blew" is tuned in the key. During the production process, a studio technician mistakedly adjusted the tuning a second time without realizing the tuning had already been adjusted once. The studio session that yielded this heavier-than-normal version of "Blew" also yielded Drop C renditions of "Mr. Moustache", "Scoff", and "Sifting" [http://www.livenirvana.com/sessions/studio/december-1988.php] . The band opted to offically release the Drop C rendition of "Blew", however, the remaining songs in Drop C tuning remain unreleased.

The "Blew EP" was released in December of 1989 on . The EP was originally scheduled to be released to coincide with the beginning of Nirvana's European leg of the "Bleach" tour, but the EP was released several months late. In addition to the song "Blew", the EP also includes "". This mix of "Love Buzz" is the "Bleach" version, and is not the same mix as the 7" version. To round off the rest of the EP, two previously-unreleased songs, "Been A Son" and "Stain" are included from a 1989 studio session with .

The "Blew EP" was released only in the and is thus difficult to obtain elsewhere. Only 3,000 copies of the EP were pressed on 12" and . Both vinyl and CD counterfeit copies exist, of which the vinyl copies vary in color (the official EP was only pressed on black vinyl).

* Demos and early live performances of the song were played in their original Drop D tuning. These versions of "Blew" contain entirely different lyrics and a clunky, non-rhyming verse structure (i.e. the introductory verse: "We were in the garden wasting time/we were in love and like to blew)" [http://www.livenirvana.com/songguide/body49d7.html?songid=15] . This particular demo of "Blew" was recorded in June of 1988 with at .

* A professional recording of the song was released on . This live performance took place on November 25th, 1991 in the Netherlands.

* Video footage the aforementioned November 1991 performance originally appeared on the Nirvana "", and subsequently, on .

*Japanese musician has covered the song.
*American Pop-punk band The Ergs! covered the song on their Blue EP. The EP contained an original, Blue on side A, and a cover of Blew on side B. The EP was only pressed onto blue vinyl.
*Northern Irish Alternative rock band Ash covered the song, releasing it on their Numbskull EP in 1999.