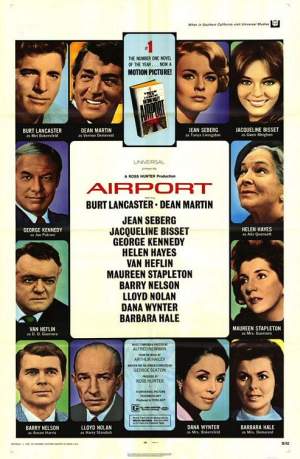 "Airport" is a 1970 film based on the 1968 novel of the same name. This film, which earned over $100,000,000 [See "The Numbers" site [http://www.the-numbers.com/movies/series/Airport.php] ] at the box office, centers around an manager trying to keep his airport open during a snowstorm, while a suicidal bomber plots to blow up a in flight. The film cost $10 million to produce.

"Airport" paved the way for the genre and established many of the conventions for that genre.

The movie was written for the screen and directed by . Seaton was assisted by , and photographed it in 70 mm . It was the last film scored by before his death.

This film was based on the best-selling novel by . With considerable attention to the details of day-to-day airport and airline operations, the plot of the movie concerns the response to both a paralyzing snowstorm and to an attempt to blow up an airliner. Demolition expert D.O. Guerrero (Van Heflin), down on his luck, purchases a life insurance policy with the intent to commit suicide by blowing up a Rome-bound Boeing 707 Intercontinental jet from a snowbound Chicago airport. He plans to do this while he is on board, using an improvised bomb, while the plane is over the Atlantic Ocean. Guerrero does this in the hope that his wife will benefit from the insurance money. The explosion causes explosive decompression but only Guerrero is sucked out of the plane. The plane returns to Chicago where it makes a successful emergency landing – all while the airport is suffering from the snowstorm.

In the movie, who plays check-pilot Vernon Demarest, calls into Cleveland Center on his way to Chicago. Cleveland Center is a reference to the ARTCC or in . This center is the busiest control centers because of air traffic. Dean Martin had his career start in Cleveland.

The film is characterized by ensemble acting in which many different personal stories interact, and by the emphasis on the decisions which must be made minute-by-minute by the airport staff -- particularly Joe Patroni, and the pilots, to ensure the safe operation of the air flights in conditions of extreme weather and air sabotage.

The majority of the filming was done at . A display in the terminal, along with stills from the field and from the film itself told the story thus: "Minnesota's legendary winters attracted Hollywood here in 1969, when portions of the film "Airport" were shot in the terminal and on the field. The weather remained stubbornly clear, however, forcing the director to use plastic 'snow' to create the appropriate effect."

Only one was used in the filming: airreg|N|324F, a 707-349C, was leased from by and sported an over its bare metal finish, with the fictional Trans Global Airlines (TGA) titles and tail. In March 21, 1989 that aircraft, flying for with registration PT-TCS, crashed while making a high speed approach at runway 09R of São Paulo's after departure from . [Details of 707 crash in São Paulo [http://aviation-safety.net/database/record.php?id=19890321-0] ]

Lancaster and Martin made quite a lot of money on this project, as they both had a percentage share of the box-office receipts of this picture.

The one actor appearing in all four "Airport" films is George Kennedy in role of Joe Patroni. Patroni's character evolves over the series, however, and he goes from a chief mechanic in "Airport" to a Vice President of Operations in "Airport 1975", a consultant in "Airport '77", and an experienced pilot in "The Concorde...Airport '79".