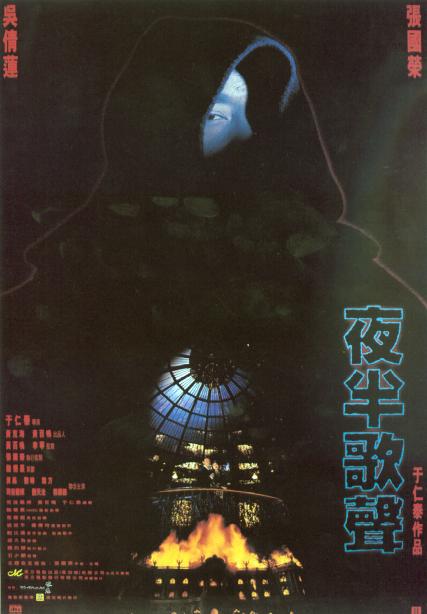 "The Phantom Lover" (夜半歌聲) is a 1995 Hong Kong film starring and . It was directed by and is a remake of the 1937 film "". The film itself is a loose adaptation of the classic romance where love between two passionate lovers were ultimately doomed when parental opposition was the major obstacle. The main theme of the film was, however, a strong adaptation of the . The film's language is entirely in Mandarin.

The film is loosely based on real life "Phantom Lover" Dan Cheung, known as such due to the ghostlike (that is, not real) nature of the women he romances. The film is set in in the 1940s. Song Dan Ping (Leslie Cheung) was an ambitious theatre actor and owner who built his dream magnificent playhouse from where he entertained and dazzled the theatre-loving populace with his adaptation of classics such as and other tragic love stories.

His passionate and devoted performances, drew the attention of the beautiful daughter of a corrupt and despotic official named To Wan-Yin (Jacqueline Wu). To Wan-Yin would sneak out of her house with her personal maid in the night to watch Dan Ping's play (he was acting as Romeo in Shakespeare's play--'Romeo and Juliet'). During the patriarchal era, romance between an actor (considered useless and without a bright future) and a rich man's daughter was definitely a taboo (it was an irony that the couple were 're-enacting' Romeo and Juliet in the movie). Hence after each performance, Dan Ping and Wan-Yin would have a rendezvous at the theatre and their love deepened to the extent that they vowed to run away from the city and to get married elsewhere.

However, Wan-Yin was betrothed to a man whom she did not love and was reputed to be cruel and sadistic and this persuaded her to throw caution to the wind and run away from home with Song. It also turned out that Wan-Yin's father arranged the marriage (as was the custom of at that time) to benefit himself as he sought to become allies with another official of great influence, whose friendship would help to improve his social standing.

As fate dictated, the eloping couple was caught before the plan came to fruition and Wan-Yin's maid, who had assisted the eloping couple in their attempt to escape, was brutally beaten until she was crippled. Meanwhile, Wan-Yin was locked up in the house by her father to prevent her from eloping.

This did not end the couple's tragic fate. Wan-Yin's fiance had arranged his men to harm Dan Ping. After disfiguring Dan Ping's face with burning acid, they set the theatre ablaze with Dan Ping and many other innocent people in it. After Wan-Yin came to know about the fire and Dan Ping's disappearance, she resigned to fate and married her fiance.

On her wedding night, Wan-Yin's husband found out that she was not a virgin (he did not 'see red' on their nuptial night). Wan-Yin was then abused and eventually drove out of the house and was forced to lead a wandering life with her crippled maid. Wan-Yin soon lost all her senses as her longing for Dan Ping drove her crazy.

Many years later, a group of performing arts students traveled from to perform in the city where Song Dan Ping had performed, eager to adapt his exploits and to improvise on his legendary performances. They came to the theatre hall, with its outer foundations still intact but with the internal sections terribly destroyed, and made their temporary quarters there. Many people believed Song to have perished in the fire but he was indeed still living as the students made their home in his theatre.

Song, however, was badly scarred in the face and was never to reveal his once-handsome face to the outside world and earned the nickname 'The Phantom lover' by his once-loving audience. His personality was also changed as he was severely depressed and morose after the tragic incidents and had lived the life of a hermit ever since. When the students arrived at the theatre, he was slightly encouraged to reveal himself when one of the more talented students tried unsuccessfully to sing his ultimate love serenade whom he dedicated to Wan-Yin. Song later lashed out at the students' incompetence when he could no longer bear such disparaging performances of his efforts and decided to reveal himself and his scarred face to them.

When the officials heard that the students tried to popularise Song in their theatre performances and reenact his glorious days, they came to arrest the students. Little did they know their evil deeds were exposed to the public who came for the performances. One by one, the accomplices to the plot to burn down the theatre were forced to confess in detail, to their crimes.

Justice was finally achieved but only as a hollow victory on Song's part. In the closing moments, Song was seen holding his lover's hands. Wan-Yin had since become an invalid, and she had also become blind as a result of her ex-husband shooting her. She recognized Song, but lamented that she could not see him - a blessing for him, since she couldn't see how ugly his face had become. The two lovers finally departed the town in a coach, together at last. An epilogue reveals that Wan-Yin died a year later -- probably due to the shooting injuries -- and that Song never loved another woman in his lifetime.

The film's theme song was composed and sung by entitled 夜半歌声 "The Phantom Lover" also featured in his album 宠爱 "Beloved". Another individual song popularised by this film is 一辈子失去了你 "Endless Embrace" also found in the same album. The film's excellent Western-influenced score was composed by .