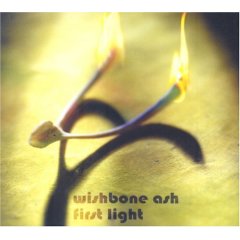 "First Light" is what could have become the first album by legendary rock band . The recording was made to get a record deal but as the band signed to MCA Records with the well-known help from guitarist in early 1970, they decided to re-record most of them.

In 2006 a Wishbone Ash aficionado from America named Dr. John managed to purchase the acetate from a Christie's auction and in 2007 the re-discovered recordings were released by Talking Elephant and so the Wishbone Ash fans finally got the opportunity to experience the very original versions of tracks from the debut-album as well as two never before heard songs "Roads Of Day To Day", and "Joshua" and a vocalized version of "Alone" (which appeared as an instrumental on the second album Pilgrimage). The album as a whole represents the band in their first stages of their creation. During the sessions of recording, the band used home made instruments - Martin Turner used a home made bass guitar which he had bought for £5.