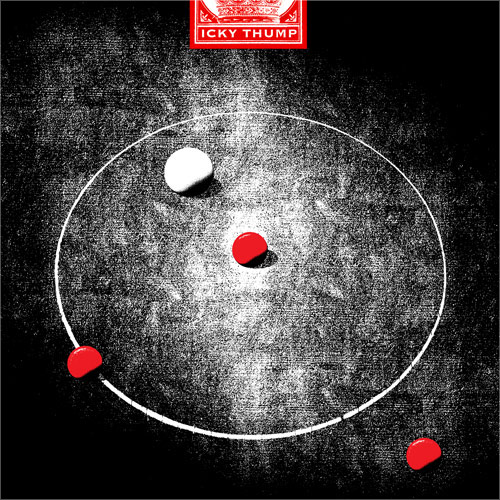 "Icky Thump" is a -winning song recorded by . Written by , it is the first single released from "".

The name of the track comes from the exclamation "Ecky Thump," roughly meaning "what the heck?" The title was then changed to "Icky" so that "teenagers would understand it better back in America," in the same way took out the "a" so Americans wouldn't call them 'Lead Zeppelin' (pronounced 'leed')"

The music video for "Icky Thump" premiered on AOL.com at midnight EDT on , . The video was co-directed by and the Malloy Brothers.

The video was filmed in Nashville, , though it is set in . The video also features Mexican Spanish subtitles acting as a translation of the lyrics.

The video for "Icky Thump" debuted on 's on , . This marks the first time a White Stripes video has ever been on the countdown.

The single was made available online through the United States and Canada on Thursday, , .

/ also released CD and vinyl versions of the "Icky Thump" single on , in the UK.

The song was #23 on the , not the first time for the White Stripes.

Though grounded to a greater degree than the "" singles in straightforward garage rock, the song differed radically from previous White Stripes singles in its unusual construction: angular tempo-changes, stream-of-consciousness lyrics, and chaotic improvised snake-charming solos, played on a synthesizer.

The song deals with the topic of immigration

The lyrics talk about someone (perhaps Jack White himself) taking a trip to Mexico in a wagon, easily crossing the border to Mexico, as opposed to the difficulties illegal Mexican immigrants face while crossing northwards. It then mentions a Mexican lady giving him a bed to sleep in, then tying him up and holding him hostage. When finally able to escape, White decides to start doing his own house chores (referring, most likely, to the hiring of illegal immigrants as very low paid house servants). In the video, when White escapes the lady's house and crosses back to the USA, he passes by Mexican workers building a wall, likely the so-called Great Wall of Mexico.

The defining verse against immigration policies comes near the end of the song:

"White AmericansWhat? Nothin' better to do?Why don't you kick yourself out?You're an immigrant too.

The song also ended the 15-week run of "" by at the top of the chart. It is the second song by the to top the chart, after "." The song is sandwiched between the 15 week run at number 1 of " and "The Pretender" by 18 week run, separated by only the 1 week appearance of "Paralyzer" by .

The reference for "acharts" was deleted and all the remaining references got screwed up.