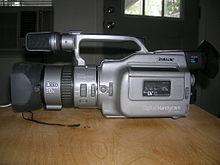 The Sony VX1000 is a Digital video camera that was produced by Sony Electronics in 1995, being replaced in production by the Sony VX2000 in 2000 and the VX2100 in 2004. It was the first prosumer camera that enabled the user to transfer video information via IEEE 1394 firewire to a Windows or Macintosh computer. It was also the first camcorder in which both the MiniDV format and 3CCD color processing technology were used. It was based on Sony's earlier Hi8 camcorders VX1(PAL) and VX3 (NTSC) which were also prosumer grade camcorders. During the mid-1990s, Sony dropped Hi-8 in favor of the emerging DV format, and as a result the VX3 and VX1 were discontinued in 1995. However they went on to serve as the framework for a line of professional DV cameras, including the DCR-VX1000. It is recognized as the most popular camera to shoot with in the Skateboarding industry due to its raw footage, crisp audio and that fact that Century Optics designed their Mk 1 fisheye lens (The widest fisheye lens possible) to be specially made for the VX1000. Additionally the "handle" on top allowed for closer views and easier shooting while skateboarding.[citation needed] The vx1000 is still highly prized, despite the many advancements in video camera technology that have followed it.

This camera's resolution and video clarity was unrivaled at the time. It sold for about 3500 USD when it came out in the mid nineties. However, the camera has now been replaced by most (semi) professionals with more recent models, such as the Sony PD150 or PD170 and the Sony Z1. Videos recorded in DV can have up to two times the horizontal resolution of VHS. The use of three CCDs can yield up to three times the component color sampling of single CCD cameras. This results in sharper, brighter colors and the time base correction was meant to eliminate the "jitters" encountered in some tapes. Adaptive Frame Interpolation interpolates both fields into one frame and smooths out jagged, stair-step images. 4-capsule microphone provides clear stereo separation and superior digital wind noise reduction. The image is created using three 1/3" CCD chips by prismatically splitting the optics into red, green, and blue, and processing each of these channels individually; this preserves quality especially with red hues. The camera imaged in 410,000 pixels with horizontal resolution of better than 530 lines.