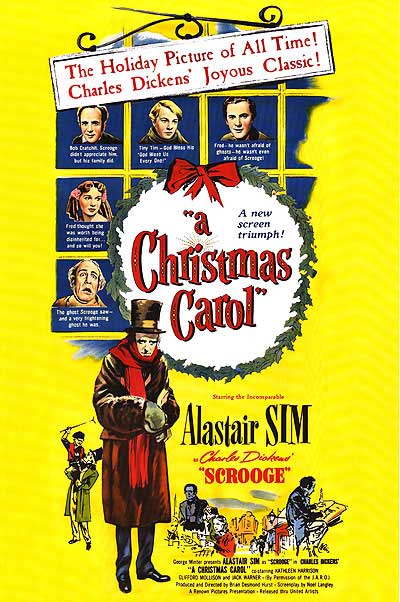 "Scrooge" (1951), released as "A Christmas Carol" in the U.S., is one of the most well-known film adaptations of 's "". It starred as Ebenezer Scrooge and was directed by , with a by .

The film also featured in an acclaimed turn as Mrs. Dilber, Scrooge's charwoman; a role found in the book, but built up for this film. Fans of British cinema will recognize as the younger version of , as Mrs. Cratchit, as Bob Cratchit, Clifford Mollison as Samuel Wilkins, a debtor, Jack Warner as Mr. Jorkin, a role created for the film, as Marley's undertaker, and as a young Jacob Marley. plays Marley's Ghost, as well as old Marley. serves as narrator, by reading portions of Dickens' words at the beginning and end of the film, and also appears on-screen as one of the businessmen cynically discussing Scrooge's funeral.

In addition, the film expands on the story by detailing Scrooge's rise as a prominent businessman who was corrupted by a greedy new mentor that had lured him away from the benevolent Mr. Fezziwig. When that new mentor, who does not appear at all in Dickens's original story, is discovered to be an , the opportunistic Scrooge and Marley offer to compensate the company's losses on the condition that they receive control of the company that they work for - and so, Scrooge and Marley is born. During the sequence, the film also reveals that Scrooge's girlfriend from his younger days, Alice, works with the homeless and sick. In this telling of the story, unlike the book or most other film versions, Scrooge's beloved sister Fan is assumed to be slightly older than Ebenezer. In this adaptation it is revealed that his mother died while giving birth to him (necessitating the change of birth order between Ebenezer and Fan), causing his father to always resent Ebenezer for it. He is reminded of this by the Ghost of Christmas Past when Scrooge bitterly mentions that Fan died from complications after delivering his nephew, Fred.

The film did not attain its current popularity in the USA until the , when it began to be shown on television. Until then, the most frequently seen film version was 's 1938 adaptation starring . The Alastair Sim version had received a favourable notice from "" when it opened in 1951, [ [http://movies.nytimes.com/movie/review?res=9C0DEEDB143BE03ABC4151DFB767838A649EDE The Screen In Review; Dickens' 'A Christmas Carol,' With Alastair Sim Playing Scrooge, Unveiled Here] , Bosley Crowther, "," November 29, 1951] and a mostly negative review in "" [ [http://www.time.com/time/magazine/article/0,9171,889415,00.html "TIME" review] , December 3, 1951.] but otherwise had not caused much of a stir. However, in the years since its first American TV showings on local stations, it has attained classic status in that country. Sim's characterisation of Scrooge, from mean and sinister to happy and generous, receives particular praise.

A colourised version of the film was released in 1989, and many of the DVD issues include it as an extra.

Alastair Sim and Michael Hordern reprised their roles two decades later, lending their voices to ' 1971 animated version of the tale.