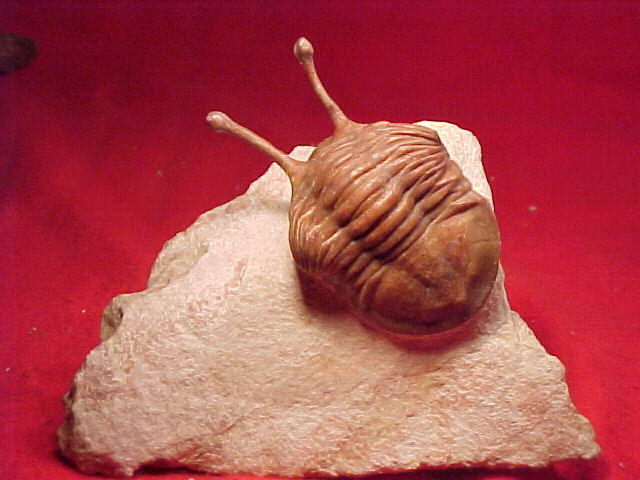 "Asaphus kowalewskii" is one of the 35 species of of the "Asaphus" (this particular species is sometimes placed in its own genus, "Neoasaphus"). s of this species are popular among collectors because of their prominent stalked eyes, many an inch or more in length.

Sometime during the period, an inland sea formed in what is now Eastern Europe. The sea contained a remarkably diverse trilobite fauna. Over a dozen species of "Asaphus" developed in this sea, with many species, including unrelated species, developing long eyestalks (officially called "s") in various lengths. That so many species of trilobite developed eyestalks suggests that they were trying to overcome increased , or there was some sort of massive selective pressure leading these trilobites to bury themselves in the substrate up to their eyes. This species may have lain in wait buried in a benthic layer of loose debris or sediment with only its periscope eyestalks protruding above, looking out for danger or prey.

The fossils of this species are found only in the middle Ordovician deposits of the region near , .

"Asaphus kowalewskii" is the well-known stalk-eyed Asaphid from Layers of Baltoscania. Long stalks eyes of that species let the trilobite to dip into mud and look after predators.

The carapace is medium-sized. The celaphon shortened, rounded anteriorly, without beaklike end. The frontal lobe of glabella is moderately convex, with maximum convexity in the middle part, not reaching the anterior margin, not bordered with preglabellar furrow, occasionally has a weak longitudinal ridge. The medial lobe is clearly bordered laterally, the flexure between it and frontal lobe is sharp. The basal lobes are absent. The eyes are medium length, high and elevated on high pedicles. The long axis of the transverse section of eye pedicle is less than the long axis of the socle. The eye basis are close to posterior margin of the shield and are widely separated. The eye socles are developed. The ocular areas are not elevated above the celaphon. The eye lists are absent. The bends of anterior branch of facial suture are as follows: the ocular blend is weak, the marginal bend is rounded, and the anteriorbend is distinct. The cranidium has a broad lingual. The distance between the facial sutures at the level of marginal bends is considerably less than at the level of the eyes socles. The maximum width of the anterior part of the fixed gena is situated near the eyes base. The dorsal furrows are of medium depth in the frontal lobe and small in the basal lobes.

The glabellar furrows are absent. The psudodorsal furrows are of medium depth. The occipital furrow is deep. The fossulae are clear. The paradoublural furrows are weak. The occipital node is distinct. The librigenae are flat. The genal corners are acuminate. The vincular pits are not expressed on the outer surface. The occipital ring and the rings of the body rahis are convex. The piggidium is elongated, with rounded lateral margins and a rounded or weakly acuminate posterior end. He rahis is coarsely segmented (four anterior segments are visible, the following segments are either absent or very weakly expressed) and abruptly bordered posteriorly. The pleurae are flat and smooth and are weakly bordered behind the rahis. Closely spaced and numerous D-folds are present on the frontal lobe of the glabella, anterior parts of the fixed genae, the entire surface of the librigenae, and the eye pedicles; widely spaced and coarse folds are present on the rings of the body rahis; these folds are emphasize segmentation on the pygidial rahis; they are transverse on the pygidial pleurae and absent from the medial and basal lobes of the glabella and from the occipital ring. The panderian organs are neoasaphine.

* N. Lawrow (1856). "Verhandlungen der Kaiserlichen mineralogischen Gesellschaft zu St. Petersburg Jahr 1855–1856".
* Some of the information in this article was taken from the website [http://www.trilobites.info/ A Guide to the Orders of Trilobites] by Sam Gon III.
* Ivantsov A.U., Paleontological Journal, Vol. 37, Suppl 3, 2003.