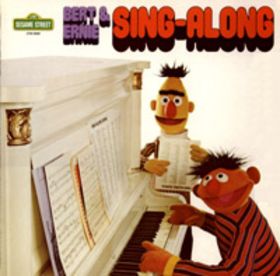 Last album =
This album =
Next album =

"Bert and Ernie Sing Along" is a "" released in 1974 that involved the entire known cast of humans and doing a in 's .

The album starts out with one of the rare times you hear of Bert taking a bath. As he does so, he is heard singing "". Eventually comes in and pushes their piano into the bathroom and decides to join in, much to Bert's dismay. He starts playing music, which accompanies Bert singing in protest of the whole thing ("I Refuse To Sing Along"), with Ernie, in counterpoint, trying to persuade him to sing along.

After the song, and just as it seems Bert is going to get Ernie and the piano out, David joins them, followed by Gordon and Bob, then by Luis, Maria and Susan. They would start off by singing "" then Gordon, Luis, Maria, and David would do "". At this point Bert would start asking for a towel, conceding his bath to be over, but is either ignored or turned down by others because they couldn't access one for him.

Next, the other muppets would start arriving. would be the first to arrive along with his assorted set of bells (as heard when he drops them all over the floor), and do a song called "Love is a Feeling". Following him is who comes in and counts all the standing people (the humans and Ernie), one big bird, and one shivering person in the bathtub, then starts counting the bathroom tiles before Maria and Bob suggest he sing a song. He proceeds to sing "Bats in my Belfry" which consists of the lyrics "One bat hanging in the steeple. / One bat flies-a-through the door. / That makes two bats in my belfry. / Wonderful, but wait there's more." and continues this verse adding more and more bats, until the rest suggests throwing him in the shower.

Next ones rolling in (literally) are , , and , all on Herry's motorcycle and sidecar (which they managed to drive into the apartment then into the bathroom). Once they dismount, they grab their various instruments (Grover's , Cookie's bass drum, and Herry's gong) and proceed to do a very bad rendition of "" (the round is led by Grover, then followed by Cookie and Herry) until some freak accident causes them to fall over one another and end the song abruptly.

Then Oscar comes in, and does nothing more than complain of their noise, and sings a short song threatening to call the police on them if they don't shut up. At that, the whole group sings "Oscar Don't Allow" (directly parodying "") At the end he scoffs at them, but then the final human, Olivia, joins them by immediately singing a limerick telling Oscar off (he isn't heard from again in the album), kicking off "The Limerick Song (Come on and Sing Along with Me)", which Bob, Ernie, and Bert all contribute a to. (The Count tries, but it turns out to be the continuation if his "Bats in my Belfry" [he's up to 85 by this point] and is quickly shut back down by the rest.)

Side two starts with Luis kicking off a staple called "" where everybody, including Bert, contribute trying to guess what it is, but they end the song unsuccessfully. David then does a song called "A Very Simple Dance" where he got the whole group involved clapping their hands, stomping their feet, turning around, touching their toes, pulling their ears, flapping their arms, stretching up high, and all falling down.

Once the song ended, Bob told everybody to stay on the ground and keep quiet, while he sings a quiet song called "Morningtown Ride" about an overnight train ride to a town called Morningtown "many miles away".

Afterwards, arrives with three quarts of ice cream, and Ernie inspires the rest to sing "". Afterwards, Ernie gets Mr. Hooper to confess he also had cookies with him, which of course wakes Cookie Monster out of his silence, and gets him to do a cranked up arrangement of "", to which once the song ends, he eats every single cookie there himself.

The next song is called "Peanuts", which is started by Luis, and is basically about a man who had plenty of peanuts and gave his neighbor none. (whose entry was never revealed) sings a verse using "soft sweet soda crackers", then Ernie uses "nice rich ripe red strawberry shortcake", while Big Bird tries to top them all with "gooey sticky with plenty of cheese, pepperoni, and anchovies on top, and maybe some orange drink", but his is so far fetched they shut the whole song down on him.

The next song they all sing together is "", which segues into "". Once that ends, Luis brings back up "What's the Name of That Song?" to which Cookie suggest "Moon Over my Cookie", and Big Bird suggests "The Blue Bird of Happiness", and The Count comes out of nowhere to suggest "604 bats hanging in the steeple", and is booed as they start the song again. Eventually, Bert jumps up and starts up a cranked up rendition of "Sing", much to Ernie's surprise.

After that song, punctuated by Bert and Ernie's signature laughs, you'd think that's the end, but no. We soon hear a band playing "" in the distance, and Ernie suddenly remembers he also invited the . At that the door opens and we can hear the band clearer, along with everyone else's sheer delight at their presence, as the album finally fades out.